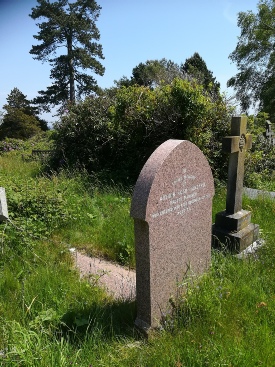 Who entered into rest December 5th 1913

Arthur Agar Hansard was born in 1841 or 42 in Montacute, Somersetshire.

At some point he joined the merchant navy.

In the 1881 Census he was aged 39, single, a master mariner. visiting at an address in The Strand.

Captain Hansard became marine superintendent for the B.I. Company's mail line of steamers, and vessels of the Queensland Steamship Company in about 1884.  He dealt with many problems, inclduing a cholera outbreak aboard the Dorunda.  [More information to be found searching https://trove.nla.gov.au/]

The Sydney Morning Herald, Tue 25 Nov 1884 BRISBANE, Monday.
The municipal council of Brisbane have accepted the tender of Captain Hansard, the marine superintendent the Queensland Steam Shipping Company, for the lease of the now municipal wharfs for a period of five years  at the rate of 120 per annum.

Elizabeth Maycock came to Australia as a remittance passenger (no 11754 in ship log) aboard the Dorunda -a 1924 ton vessel under the charge of Capt Hansard - when she was just 14 years old……..They left London May the 2nd 1888 and arrived in Brisbane June 27th 1888.

In the 1901 Census he is at St. Ives, Huntingdonshire (now Cambs.) listed as married, and Master Mariner Retired.

In 1911 Arthur is living as a Lodger in All Saints, Hastings.

Western Mail (Perth, WA ) Fri 6 Feb 1914
The death occurred in England in December of Captain A. A. Hansard, who arrived in Brisbane originally to open the B.I.Company there..... Retiring on a pension, Captain Hansard returned to England where he lived until the time of his death.