Alfred William Hassam (1842-69) was a painter and stained glass designer who was born in London, the son of a vellum binder.  He may have trained at the Central School of Art (later the Royal College of Art) in South Kensington, or one of the other art and design schools supervised by the South Kensington-based Department of Science and Art.

In the early 1860s he joined the London stained glass firm of Heaton, Butler and Bayne, where he is thought to have served as assistant to Robert Turnill Bayne.

In 1865 he won a prize for his stained glass design for the north staircase of the South Kensington Museum; the V&A collection includes his stained glass panel (V&A 435-1865) which was exhibited at the Museum in 1865.  During the late 1860s Hassam exhibited portraits and historical subjects at the Royal Academy and the Royal Society of British Artists. He died tragically  in Hastings of consumption at the age of 27.

Heaton, Butler and Bayne,London. The firm had its beginnings in the year 1855. 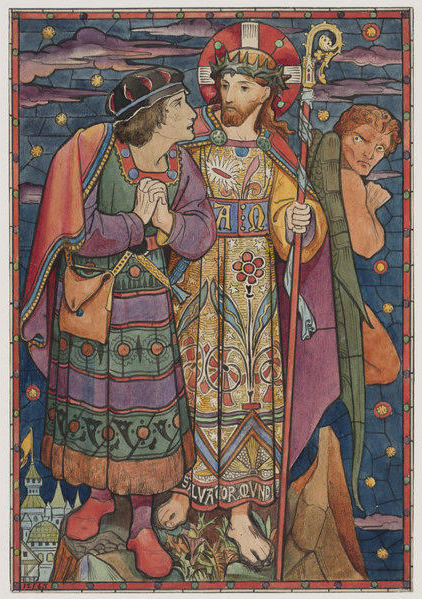 Joining them were two of the most talented designers of the 19th century, Robert Turnill Bayne and Alfred Hassam. Throughout the country, churches are brilliantly lit by their windows. They set about reforming stained glass design producing a body of work that rivalled Morris, Marshall, Faulkner & Co. yet has undeservedly been overlooked. " [William Waters with photographs by Alastair Carew-Cox : ANGELS & ICONS Pre-Raphaelite Stained Glass 1850 - 1870]

The earliest commissions in the 1860's, were of a highly-coloured gothic style and were probably the work of the artist and glass painter Alfred Hassam. They are to be seen at Ulverston St Mary and Dalton-in-Furness.

On the north side of the church is a window from the earlier church, dated 1862, made by Heaton, Butler and Bayne and designed by Alfred Hassam.

“The committee of the Ecclesiological Society, who adjudicated in this competition, awarded the first prize to Mr. Alfred Hassam, in the employ of Messrs. Heaton, Butler, and Bayne, of New King Street, Co vent Garden “

Many of his works can be found on the Internet.

With thanks to Douglas Schoenherr

This design depicts two separate iconographical motifs that have been amalgamated by Hassam; Christ as the Good Shepherd, in this rendering sheltering a pilgrim from the winged figure of Satan, and the Temptation of Christ atop a mountain, the third and last temptation described in Matthew 4: 8-10.