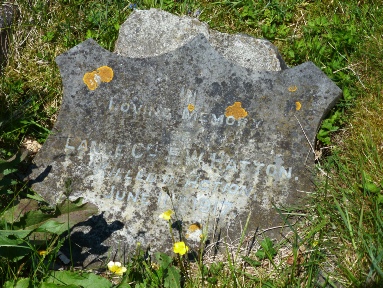 Frederick is remembered on the grave of his father F.G. Hatton who died on 16th October 1916.

Frederick Hatton was killed in action on 11th June 1917 aged 36 and is buried in Vlamertinghe New Military Cemetery, Belgium. He served with the South Lancashire Regiment 1st/4th Bn. He had previously served in the South African campaign of 1901-02

He was born in St Leonards in 1881, the son of Frederick George, a builder, and Jane Hatton. In 1911 the parents were living at 16 Kenilworth Road with two of their sons who were both working in the building trade, as was one of their daughters.  The other daughter was a dressmaker.

Frederick George Hatton, whose grave it is, is recorded in the 1861 census, aged 9, living at Upper Trinity Terrace, with his parents  and two sisters. His father, George, was a painter, born in Leicestershire.

The Platoon Commander, writing to Mrs. Hatton expressing his sympathy with her, says: "We all feel his loss most keenly and understand only too well what you must feel. He was one of the best, and a real pal to us all.  I, myself, during the few months he was with us grew very fond of him, and quickly realised his great worth.  I had already mentioned him for promotion.  Although it is rather painful to write about and for you to read, I feel you would like to know how it happened.  My platoon was working to the front line, when a shell burst close by where Lance-Corporal Hatton was with three men. Immediately he called out and warned the men to keep down, but as he spoke he was hit in the temple and killed instantly.  I was with him immediately afterwards, as I was only a few yards away with a few more men, and can assure you that he died instantly.  He was

carried back by his pals, and now lies in an honoured grave near by our headquarters.  I must say that under fire he was absolutely splendid, and a fine example to the men."

The late Lance-Corporal Hatton was the eldest son of the late Mr. F. G. Hatton, of St Leonards, and joined the 1st Cinque Ports Rifle Volunteers at Hastings on January 26th, 1896, and served until January 7th, 1900.  He enlisted in the Regular Army (16th Queen's Lancers) ten days later, and proceeded to South Africa on January 24th, 190, serving under General French.  He was promoted Corporal by the Commander-in-Chief November 22nd, 1901, and was mentioned in Lord Kitchener's despatches, April 25th, 1902, for gallantry in action.  Promoted Sergeant August 30th, 1903 and discharged January 16th, 1912.  He had a medal and four bars, and his service totalled 16 years.  He joined up with the Derby Group on August 8th, 1915, in the royal Engineers.  He went to France 30th December, 1916 and was killed in action on 11th June, and buried in a military cemetery, officers and men of the Battalion being present.