There are several  references in a magazine called The Era
around the turn of the century to a Miss Laurence Therval as an
actress touring with both Edmund Tearle and David James’
company.  One mentions her “showing praiseworthy skill”.

The Times of 11.11.1911 mentions a play called “Christina” a
“Scottish divert” in 3 acts by Miss Laurence Therval.  It is from the story by J. J. Bell author of “Wee MacGregor”

A COMPLETE STORY. AN ERRAND OF MERCY - Chronicle (Adelaide, SA : 1895 - 1954) Saturday 5 May 1917
(By Laurence Therval. «I had been spending the evening with a friend who lived out in the remotest part of Maida Vale, and sitting in his cosy rooms, smoking and talking over old days…..

An earlier Times reviews “The Violin Player” a novel by Bertha Thomas published in 1881 and set in Italy.  One of the main characters is a little girl named Laurence Therval.  Emily would have been 15 at this time.  Did she read the book and take her pen and stage name from it?

The 1881 census shows Emily living at 4 The Oaklands, Kingston with her parents, siblings and a domestic servant.  Frederic, her father, is a solicitor.

By 1891 Frederic is a civil servant at the Royal Courts of Justice.  Emily Louisa is now listed as being 23 and a pianist and teacher of music.  As well as Amelia, her mother and siblings, there is a German servant and a visitor.  Their address is 5 Rochester Terrace, Clapham.

In 1911 Amelia is now a 65 year old widow of private means, living alone with her daughter at 82 Elm Park Mansions, Chelsea.  Emily is 34, single and her occupation is dramatist. 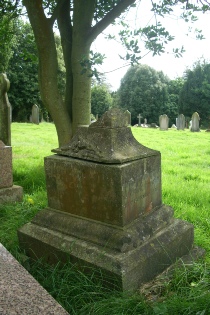