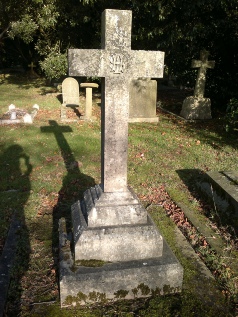 Served with the 61st regiment of Foot – South Gloucester’s, most certainly in India, and at the time of the Indian Mutiny the regiment was stationed at Farozepol, and was one of the first British units to reach and protect Delhi.

The Regiment returned to the UK in 1860, having served in India for no less than 17 years.

He next appears in the 1861 census, as living at Raglan Barracks, Plymouth where the 61st Regiment of Foot are recorded on the census night.  His rank is given as Captain.

The 1871 census records him and his wife as visitors at the house at Sussex Square Brighton, home of Henry Moor, Deputy Lieutenant of Brighton & Sussex. JP – the father of his wife Agnes.  He is recorded as Major – unattached late of 61 Regt of Foot.  That is, he still hold his commission in the British Army, but is not attached or part of any unit strength.  He would be on half pay,  as a lot of officers were ,after the wars.