He was a sergeant in the 1st Btn Canadian Infantry, Western Ontario Regiment and died at Kings College Hospital (4th Military Hospital) London on 11th April 1916 at the age of 42.

His address is given as 4 Stirling Rd, Clapham.  His only brother Alfred John Hill, lived at 9, London Rd St Leonards.

He is buried in the same plot as Harriett Hill who died in October 1900, although there is no memorial for her.

She was described as an ironer and he first as a scholar and later as an umbrella repairer.

In 1881 Harriett was a widow living with two sons and two daughters, Frederick being the youngest.

By 1891 only Frederick was living with his mother. Perhaps he left for Canada after her death, but obviously still retained family links with Hastings.  His brother was granted probate after his death.  The transcript of his Canadian attestation papers gives no further information. 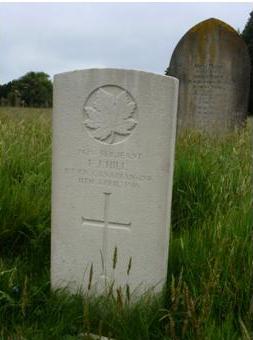