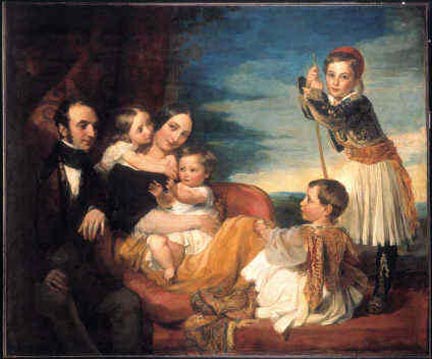 Alexander Constantine Ionides and his Wife Euterpe, with their children Constantine Alexander, Aglaia, Luke and Alecco

Alexander Constantine Ionides was the son of Constantine Ipliktsis (1775-1852), a Greek textile merchant who emigrated to England in 1815.

He was a merchant and stockbroker who took over the family firm when he was twenty, and by 1830 metropolitan directories list 'Ionides Co., Merchants' based at 9 Finsbury Circus, London.

He was appointed Greek Consul General in London from 1854-66.

He developed an interest in art and artists and became a colletor. He was one of the Directors of the Crystal Palace.