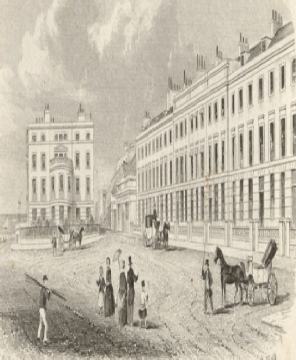 He became a Commissioner for St Leonards in 1832.

By 1835 the White Rock had been removed and Rock had taken premises at Stratford Place, which had been developed under the cliff.

In 1835 the Royal Victoria was a new coach built by James Rock, which travelled to London in seven hours from St Leonards.  This was two hours quicker than the Hastings coaches.  James had been granted a Royal Warrant by Princess Victoria and when she became Queen, this was again granted, indeed Rocks were “coachbuilders to the crowned heads of Europe”.  James Junior lived at Stratford Place until 1856.

It can be seen from the advertisement in the 1839 the Cinque Port Chronicle that Rock was providing a useful hire service to visitors from the capital.

By 1848 James Senior had failing eye sight and he handed over the business to his son James; the business at this time employing over 40 men.

begs most respectfully to acquaint the nobility, gentry, and visitors of Hastings and St Leonards, that they can be supplied at his establishment, 6 Stratford-place, with travelling carriages for the journey to London, at a moderate charge, without incurring the expense and inconvenience of returning the carriages to Hastings: J.R. having taken a business and premises in London, at 12 Rathbone-place, Oxford-street, where, on arriving in London, the carriages may be sent, and where gentlemen and families, leaving London for Hastings, may be supplied with vehicles in the same manner. N.B.— A travelling bed carriage for the removal of invalids.

In 1850 James Rock Jnr. accepted the post of Local Secretary for the Great Exhibition.  The firm had several items in the display:

Patent Dioropha - combining a Clarence or Piletum coach, a barouche and an open carriage. This won a prize medal.

954 Rock and Gowar - Omnibus for the conveyance of passengers of novel construction.

And also by James Rock Jnr. a model of a street barricade.