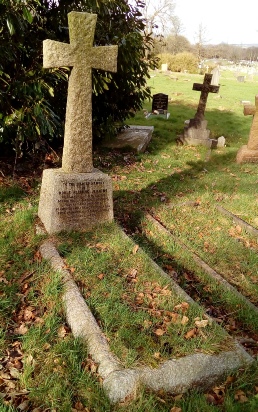 To the Beloved Memory

He gave his life trying to save a girl

from drowning at St Leonards-on-Sea 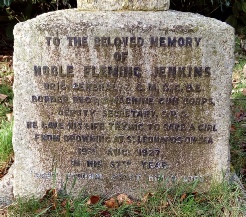 Lieutenant-Colonel Noble Fleming Jenkins, 7th East Yorkshire, had retired from the reserve of the Border Regiment in August 1910 and was promoted brigadieer-general of the 75 Brigade in February, 1916, serving until removed in July 1916 to become deputy commandant of the Machine Gun Corps Training Centre. - British Infantry Battalion Commanders in the First World War - Peter E Hodgkinson

In a brave effort to save two bathers. who wore in peril, Brigadier-General Noble- Fleming - Jenkins was drowned at St. Leonards (reports the London "Daily Chronicle"). One of the two people — father and daughter—[sic – ] whom he tried to help— also lost her life.  This was Miss Constance Slater, a visitor, from 'Sheffield.  Crowds of people on the Parade witnessed a dramatic scene when Mr. and Miss Slater got into difficulties....  ...... other' rescuers had plunged into the sea.  Among them was General Jenkins, who was wearing grey flannels.  They managed to reach Miss .Slater, and Miss Simmonds held her up until the ladder was pushed out to them, and with assistance they ' were drawn ashore.  Miss Slater was at once taken to a hospital, but was found to be dead; General Jenkins had also got into difficulties.  He was brought out of the water as quickly as' possible, and artificial respiration was applied for an hour and a half, but without success.  Seven doctors gave their services in an effort to save the life of the victim.

Brigadier-General Fleming Jenkins, C.M.G., who lived at Greycoat Gardens, S.W., had been spending a holiday at Hastings.  Born in I860,, he was the son of the late Mr. David James Jenkins, M.P. for Penrhyn and Falmouth, and was educated at Rugby and at the Royal Military College. He entered the 65th Regiment in1880, and became- captain in the -Border Regiment in 1888, retiring in 1905.  He served, during the South African war, 1899 to 1902, and during the European, war, 1914 to 1916. His first wife, whom he married in 1886, died in 1918, and he married again  In the following year.  He had been deputy secretary of the S.P.G. for about seven years, and was associated with the society before that.

Saturday 27 August 1927, Hastings and St Leonards Observer,
HASTINGS CORONER WARNS BATHERS. AGED GENERAL'S "BRAVE AND GALLANT ACT." DOUBLE INQUEST AT ST. LEONARDS. " It was very brave and gallant act, which I am sure will serve to remind everybody how acts amounting to martyrdom can be accomplished by British people when circumstances call upon them to make sacrifice," said the Hastings Borough Coroner (Mr. W. J. Qlenister), referring to the heroism of Brigadier-General Noble Fleming Jenkins, .D.5.0., Deputy Secretary of the Society for the Propagation the Gospel, who lost his life Friday, in an abortive attempt to save from drowning Miss Constance Mary Slater, of Sheffield.  A verdict of " Death from misadventure" was returned in both cases.  Miss Slater, ...... went to bathe in a rough sea on Friday afternoon, got into difficulties, and despite the plucky action of several would-be rescuers, was drowned.  Among those who plunged into the sea was Brig. General Jenkins, who was spending the Summer at Hillcroft," Baldslow.  He was 67 years of age.  ...... The son-in-law of Brig.-General Jenkins, a doctor practising Kent,-stated that the General's health was poor, and that he had had three mild cardiac .attacks, but not recently.  During the last two months lie had been extremely tired.  The General had seen service in South Africa and in the Great War.  He was a strong swimmer. but he had not bathed for ''the last five years. Mrs. Jenkins was not well enough attend the inquest, but had told witnesses that her husband had been in his usual state health just prior his death.

Brigadier-General Jenkins was buried on Tuesday within a stone's throw of the Heroes' Corner in Hastings Cemetery.

In a time of peace he had died a soldier's death, so they gave him a soldier's funeral.  His hearse was a gun carriage, drawn by men and horses of the Royal Artillery through the hushed streets.  Over his grave on the high hillside a firing party volleyed the Army's farewe,, and then the strains of the Last Post sounded their solemn Amen. [The firing party was from the 5th Cinque Ports Battalion, Royal Sussex Regiment.]