“the noble pile of the Theatre of Varieties in Marine Parade”

The largest workshops in the town were burnt down in a major fire on Saturday 14 January 1893.  The Grosvenor Works lay behind West Marina [today, Bexhill Road] opposite West Marina Station, backing onto Seaside Road.  The owner, Peter Jenkins, was a builder, contractor, monumental mason, carman, smith and wheelwright.

He also had premises at 20 Caves Road and lived at nearby 58 West Hill.  The vast four-storey workshop caught fire in the afternoon, probably from a gas defect, and within an hour the roof had fallen in.  The shops and contents were totally destroyed, causing damage of several thousand pounds, far more than the £2,000 insurance.  Thousands of people watched the spectacle.

The Observer of 28 June said: “The growing district of Bulverhythe is commonly known as ‘Jenkin’s Town’, from the fact he put up 200 houses there.”

He was born 60 years ago, moving here from London. “In 1869 he started business as a builder, and at the time of his death was on the top rung of the local commercial ladder.”

He now has 500 hands in regular employment.  He built water reservoirs at Maze Hill, Shornden and Halton, and was currently building the very big one at Ore.  He rebuilt the East Sussex Club (on the corner of Warrior Square and Grand Parade), and has erected the drill halls at Rock-a-Nore and Middle Street.

He used 1.25 million bricks in the Theatre of Varieties.  “He made all his bricks in nine brickyards at Sidley, Guestling etc, and hoped to make this season between ten and eleven millions. There would be three and a half million in the new Workhouse. … He was the largest ratepayer in the borough, being assessed for 200 houses.”

In Bexhill, he built “a good many houses”, and also Lloyds Bank [Devonshire Road] and the large Nazareth House [Home for the Aged, Haddocks Hill], plus he was then building the Hotel Metropole. 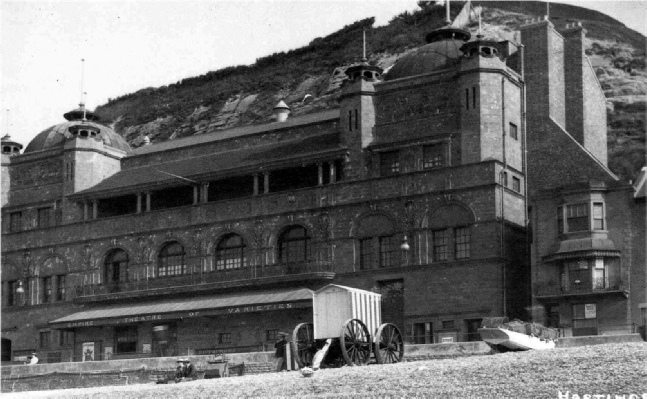