Known in Hastings as ‘Captain Jones’, presumably because he had been in the Royal Navy and had once owned a yacht.  He had obviously been a person of affluence and standing.

‘Richard Nelson Jones Esq late of the Royal Navy and of Her Majesty’s Honourable Corps of Gentlemen, second son of the late Captain Richard Jones of Tenterden, co. of Kent.   He died at Hastings June 3rd 1868 aged 57 years.’

Her Majesty’s Honourable Corps of Gentlemen was formed in 1509 by Henry VIII as a mounted bodyguard and continues to this day, although in a largely ceremonial role.  The Corps is formed of retired officers from the Services.  It is obviously a great honour to be invited to join this select band (currently 5 Officers and 27 Gentlemen).

The Queen has been pleased, on the nomination of Lord Foley, to appoint Richard Nelson Jones, Esq. one of Her Majesty's Honourable Corps of

A Richard Nelson Jones married in Elham Kent in 1854 either an Annie Harris or a Catherine Ann Vale.  In the 1851 census he is listed as a widower living at Jones Place, All Saints, Hastings with two servants.  His occupation is given as late of Her Majesty's Household.  It says he was born in 1813 in Asheridge Kent.  There is a Richard N Jones listed four times in the Lord Chamberlain's Department's Records between 1838 and 1844. 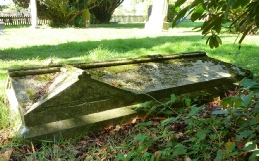