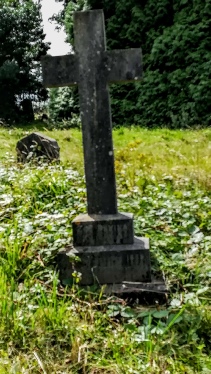 The writing on the headstone is not currently readable, and the above has been adapted from Cemetery records. 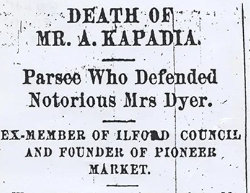 Mrs. Dyer, the baby farmer, was accused of killing an infant she had taken in for adoption. She was suspected of killing many children for money.

Two male servants who are listed as farm labourers.

[The ages of Ardeshir and Zoe don’t tally with the marriage record or the gravestone.]

DEATH OF MR. A. KAPADIA. - Ilford Recorder, 1927
We regret to announce that Mr Ardeshir Kapadia, of 13, Endsleigh-Gardens, Ilford, died at his home on Monday afternoon at the age of 64, after being confined to his house for a month.

Mr. Kapadia was well known in Ilford although for the past year or so he had taken very little part in the public life of the town.

He was the son of a Parsee merchant in Bombay and was sent to England to study English law. He did so and as a young man became a barrister-at-law.  He never practised a great deal in the courts but at one period he became famous as the defending Counsel for Mrs. Dyer in the baby farming case about 30 years ago.  Subsequently he became more and more a consulting barrister.

At one period after he had been called to the Bar he was editor of the Hansard Debates in collaboration with Mr. Charles E. Grigsby, another Ilford man who is so well known as “Edwin Charles” the Dickensian.

During the war Mr. Kapadia, who, in March, 1914, had been elected to the Ilford Urban District Council for North Hainault, had charge of the recruiting department at the Town Hall.  No less than 10,000 recruits from Ilford and district passed through his hands.  Mrs. Kapadia also did a great deal of war work.

Two years ago Mrs. Kapadia died at Hastings [she was staying with her daughter who lived in Hastings] and so great was this affection for his wife that ever since her death Mr. Kapadia made the journey to Hastings every week-end to visit her grave. At his request the grave will be opened and his ashes scattered in it after the cremation at the City of London Cemetery on Thursday (to-day).

FOUNDER OF THE PIONEER MARKET

The crowning effort of Mr. Kapadia’s life came a few years ago when he was responsible for the establishment of the Pioneer Market, Ilford-lane.

Previously a few itinerant vendors had done business in Station-road but the big shopkeepers took exception to this and pressure was brought to bear on them with the result that they had to relinquish their stands there. As an outcome of this Mr. Kapadia and some of the vendors got together and acquired the site of the present market and established the Pioneer which is believed to be a unique idea.

Ever since it was established Mr. Kapadia has devoted the whole of his energies to its development.

He was taken ill some weeks before his death with a diseased skull bone. He had one operation but it was not successful and another was projected but he died before it could be carried out.

He leaves four sons and a daughter, all married.

Before he died he left instructions that 24 hours after his death a main artery was to be severed and this was done on Tuesday.