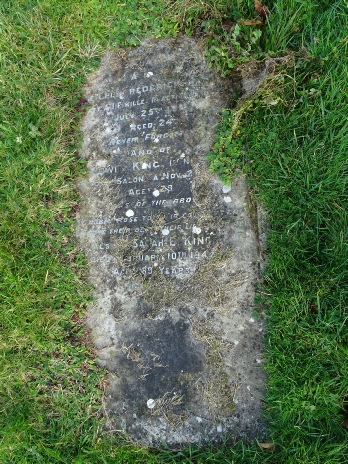 Hastings and St Leonards Observer - Saturday 21 February 1942
Mrs. Sarah King _ The death of Mrs. Sarah Elizabeth King, 7, Calvert-road, Hastings, occurred at her home onTuesday last week at the age 89. Mrs. King, widow, was known and respected by many local people, having spent many years of her life as a nurse.

The funeral took place at the Borough Cemetery on Saturday, when the Rev. A. B. Duncalfe. of Calvert Methodist Church, officiated.

The immediate mourners were Mr. and Mrs. G. King (son and daughter-in-law). Miss H King, Mrs. Wilson and Mrs. Osborne (daughters) Mr. C, Osborne (grandson)  Mr. W. Swain (son-in-law). The members of the family desire their sincere thanks for the kind messages of sympathy and for the floral tributes received.

And of Pt. Edwin King 1st Northants
Died at Salonica November 2nd 1918
Aged 29
Sons of the above.

They nobly rose to their country's call
They gave their best their life their all.