Frank Gilbert Lake was the 8th son of James and Fanny.  He was born in 1881 in Minster. He joined the Inns of Court Officer Training Corps, which was part of the London Territorial Force.  Attached originally to the Inns of Court, in 1914 it set up a training camp in Berkhamstead, from which the majority of the men obtained commissions.  Frank joined Ist Battalion, Hertfordshire Regiment, at the front at the very end of 1915.  However ,according to the Battalion war diary he seems to have moved to the Royal Flying Corps at some point in 1916 or early 1917 as there is a record of him rejoining the Battalion on 24th April 1917 from the RFC.   He was reported killed in action on 31st July 1917 at the age of 36.  The battalion war diary gives an account of the action in which he died.

31-7-17 [The Battles of Ypres 1917 - the Battle of Pilkem]. About 3.50am the Bn moved forward in 4 lines behind the 116th & 117th Inf. Bdes. east of the river STEENBEEK. Up till this time the casualties had been very slight indeed but as the Bn advanced from the STEENBEEK toward the LANGEMARCK line (the Bn objective) casualties grew heavier from sniper and machine gun fire. However the Bn continued advancing. About half way to the objective some of No.3 Coy came upon a German strong point which they gallantly charged, capturing or killing most of the garrison and sending the remainder back as prisoners. On reaching the enemy wire this was found to be practically undamaged (expect in one place) & very thick. 2/Lieut Marchington [Eric William MARCHINGTON, MC] & a handful of men of No.3 Coy got through the only gap and got into the enemy trench & killed a lot of Germans. The remainder of the Bn, being unable to get through the wire and suffering severe casualties from enfilade MG fire & the Germans making a strong counter attack from our left flank about this time, had to fall back having suffered exceptionally heavy casualties. The remnants of the battalion subsequently dug themselves in line with the 1st Cambs Regt. on the west side of the STEENBEEK.

The diary entry concluded with a list of officers killed, wounded and missing. Lieutenant F. G. Lake was listed among the missing. He is remembered on the Ypres (Menin Gate) Memorial.

Geoffrey Lake was the 7th son of James and Fanny.  He was born in 1881 in Minster, Kent. He was a member of the Royal Canadian Volunteer Reserve and was based at HMCS Lansdowne, which seems to have been a former patrol ship forming part of the shore depot in Sydney, Nova Scotia.  This was one of the two main points of departure for troops and supplies going to France, the other being Halifax.

Geoffrey died on 25th October 1918 at the age of 38 and is buried in the Hardwood Hill Cemetery in Sydney.  From the cemetery records it is noticeable that another person from HMCS Landsdowne died the same day and one the day before, perhaps victims of the Spanish flu?  He was married to Kathleen Margaret Lake and the CWGC record her address as ‘The Randolph’, 135 East 50th Street, New York.

On the family grave he is remembered:

In Proud and Loving

Whilst on active service 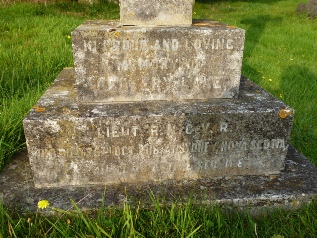