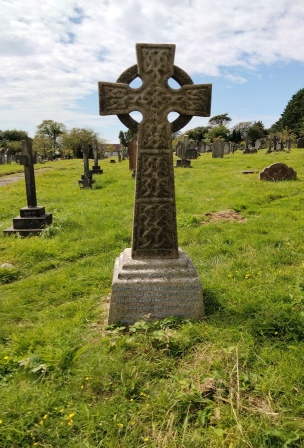 Also of Alice his wife

The Hastings and St Leonard’s Observer, 10 October 1908
We regret to announce the death of Dr. Arthur Edmund Leeson. of Franklands, Cloudesley-road. St. Leonards,. which occurred on Sunday morning.

Dr. Leeson was a distinguished graduate  (M.A. M.D.) of Trinity College. Dublin, and favourite pupil of the late Professor Stokes.

He practised both in Buenos Ayres and London. but his later years were spent almost chiefly in Italy, until three years ago. when he came as an invalid to St. Leonards.

Arthur Leeson's father was an architect, John Leeson, his mother, Theresa.  In 1819-1822 John Leeson was clerk of works at the Pro-Cathedral in Dublin.

In 1855 he was practicing in Buenos Aires, where he would live and work for the next fifteen years.

He married Alice Fraser who was aged twenty-three years and a spinster at St John’s Cathedral, Buenos Aires on 16 June 1863.

Two children were born to the Leesons in Argentina, Eleanor Constance (known as Nora) on 11 June 1864, and Mary Elizabeth on 1 October 1865.

During the 1868 outbreak of cholera in Buenos Aires glimpses of Doctor Leeson and his wife at work, are recorded in the diary of an Ellen Wyatt-Smith.  Tuesday January 21: ‘I sent for Dr Leeson to have his advice for all of us... The Dr came three times and this night as the fatigue had made me ill again, he said I must go at once to bed and get up for nothing…’ Wednesday 22:  Mrs. Leeson visited patient. Friday 24: ‘I was very poorly & sick and Dr Leeson said I must have some soup - so he went home and brought me a little can full & after that they made me some every day - and this day cooked dinner for us…Mrs. Leeson also not well…’

Arthur left Buenos Aires on the fifteenth day of October 1870.  Presumably Alice had left for London beforehand because their son, Arthur Gerald Leeson, was born 24th August 1870 in Blackheath.

The family took up residence in Switzerland, and The London and Provincial Medical Directory in 1873 noted that Leeson was now resident in Vevey.

By 1875 Leeson and family had returned to the River Plate. For the next thirteen years until 1888 Leeson worked in Buenos Aires - much of that time (from 1882 to 1888) at the British Hospital, both as a staff doctor and Chief of Service and Medical Committee Member.

In 1889 Leeson came to live at 22 Dorset Square, London NW1.  He was living in Montevideo from 1893 to 1895.  He may well have worked at the British Hospital in the Uruguayan capital.  He returned to Switzerland and lived at Territet, Montreux between 1896 and 1905.