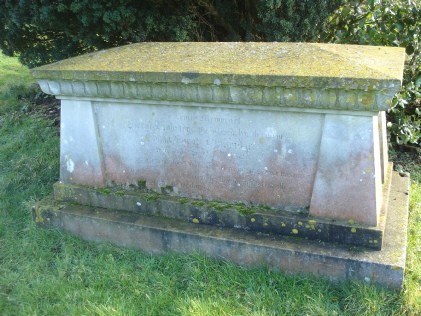 For 32 years organist to the Rev. T. Fores of St Mary in the Castle Hastings.

"My grace is sufficient for you, for my power is made perfect in weakness."

A synopsis of the Lindridge business mainly from advertisements and directories.

1846. Professor of music, no.7 Wellington Sq, is listed as one of 135 traders in Diplock’s Handbook.

1882 George died and his son carried on the business.

1933 Lindridge & Son Ltd, as agents for Chappell pianos at no.44 Robertson St.

Funeral of the Late Mr. Lindridge.—The funeral of our late lamented townsman, Mr. George Lindridge, took place at the Cemetery Tuesday last, the service being read by the Rev. C. Rolfe, Rector of St. Matthew's, Silverhill. Mr. Lindridge was organist at St. ', Matthew's Church at the time of his illness.  He had been organist at St. Mary's during the ministry of the late Mr. Vores, for 32 years.

The Rector of St. Matthew's, in the course of ' his sermon on Sunday morning last, referred to Mr. Lindridge as follows :

“I cannot help speaking of one who passed away from last us Thursday, and who, until lately, conducted the musical part of our worship.  He has passed, we trust, into the heavenly sanctuary, and joins now the music of the Church above.

But during his long and most painful illness it was most instructive and comforting to see in him the sustaining power of the true hope.

When first taken ill he was not disposed to think his malady at all serious, but as gradually it was found that no remedies could check its fatal progress, there came plainly before his mind the prospect of separation shortly from those he loved best on earth, and the certainty of Death's near approach.

Then was the time for testing the power of the hope which he had Christ.  It stood the test thoroughly.  It was his case what it has been in the case of millions of believers in Jesus—a hope that maketh not ashamed—a hope that could give peace to the troubled soul, and patience amid bodily suffering, which enabled him submissively to resign himself to die in the joyful expectation of living for ever with God."

1855 June - A song about Fairlight Glen, Music of the Stream, was published, with words by Arthur Ransom and music by George Lindridge.