LONG, William. Confectioner at no.90 Norman Rd in 1880; a Crimean War veteran & local temperance evangelist; his son Harry had a shop at no.88, (photo below) & his granddaughter Edith at no.72.

When William died at 13 Warrior Gardens, his death certificate gives his occupation as a gate keeper. 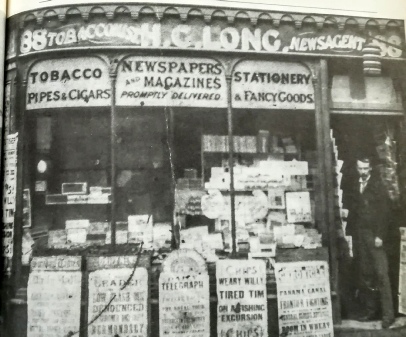 Miss Edna Annie Long, who died recently at the age of 84, was probably the oldest working newsagent in St. Leonards.  She had been in business in Norman Road for 73 years and was well known as a friendly local character to hundreds of people.

Because of the early death of her father, Miss long, from the age of nine, helped her mother in the business and eventually took over full-time.

......... The business remain open throughout the whole of her life, including the Second World War, and newspapers were delivered without a break over a wide area of St Leonards......She firmly refused to retire despite failing health and continued to work until the day of her death.

This concludes a family newspaper business covering 92 years in the same Road.