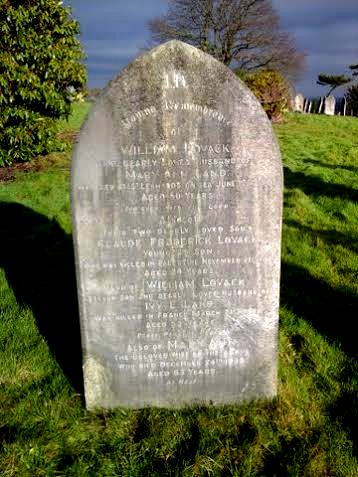 Who was killed in Palestine November 21st 1917

The Beloved wife of the above

Buried in JB K12 is the third son who died (see newspaper report) Edgar Hubert Lovak Land, who seems to go under the surname ‘Land’.  He was 26.

Claude’s age is given as 24 on the gravestone, which tallies with his birth in 1893 [FBMD]

in cemetery north of Ecoust St. Meni, on the road to Croiselles.

Lance-Corporal Lovack-Land was late manager for E Weller Lts, of 23 London-road, St. Leonards.  He joined the Special Constabulary soon after the outbreak of war and remained until joining the colours July 15th 1916.  He is the second son of Mrs. Lovack-Land, of 5,
Bank-buildings, Hastings, and this is the third son she has lost in the war.