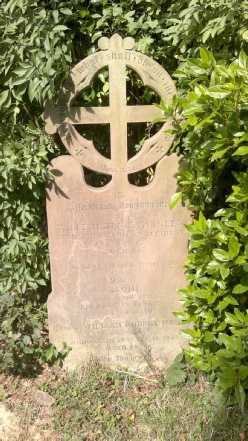 Ye know not what shall be on the morrow - James iv.14

There are records of both Naomi Dunk and Naomi Boniface connected with William Manley.

It would appear that both Naomis are the one person.

Naomi was born 25th August 1823 in Pevensey. George Boniface married Frances Dunk until 1826, three years after Naomi’s birth.  Naomi Boniface, born in Pevensey, is listed in the census records, probably indicating that Naomi regarded herself as the daughter of George Boniface (who may, of course, have been her biological father.)

It is likely that when getting married she felt obliged to use her birth name (i.e. Naomi Dunk).

The address given on the 1851 census for Naomi Boniface is the same as the address on Naomi Dunk's marriage certificate.

William Manly,[sic] 15, was living in Hastings, St. Clement parish in 1841, with James and Harriet Wellern.  James was a butcher.

In 1851, William Manly[sic], 25, was living in Hastings, St. Mary Magdalen parish, with William Strickland, his wife Mary, 43, and their family. Mr. Strickland and William Manly are listed as ‘butcher's man’

Both censuses put Naomi Boniface and William Manly/Manley in Hastings.

The 1861 census shows William and Naomi Manley with William working as a journeyman butcher.  Naomi and William in the 1861 census had six children: William, George, Ernest, Charlie, Rose and Ellen,

William Robert Manley’s birth is registered in the September quarter 1854.

1871 Census his occupation was given as a Coach Builder’s Apprentice.

He married Emily Grace Boniface, daughter of Stephen Henry Boniface and Emma Sarah in 1879 in Eastbourne.

March 1890 - Presentation
The Loyal Adelaide Lodge (2,007) of the Manchester Unity of the Independent Order of Oddfellows, met as usual on Thursday night in the Gensing road, St. Leonards, and after the ordinary business had been transacted, Bro. William Manley, on behalf of the Lodge, presented the late Treasurer (Bro. Thomas Gardiner) …..

NEW AMBULANCE HALL. OPENING, May 1909
…………During a smoking concert which followed, Mr. Locke sprang a surprise on Mr. W. R. Manley, the secretary.  “I have often wanted to get level with Mr. Manley," Mr. Locke said, "he once ' let me in' for an umbrella."  Taking a silver-plated salver from a package he handed it to Mr. Manley, amidst applause.  Members of the Brigade, he said, were , extremely anxious to testify the admiration with which they regarded Mr. Manley, and in handing it to him Mr. Locke hoped he would live long to be associated with the work of the Ambulance Brigade.  Replying. Mr. Manley said when men took secretarial work for the first year they wore generally idolised, the second year they were analysed, and the third year scandalised.  He hoped "that they would reverse the order with him. and that was he going the way to being idol.  He thanked them heartily for the presentation. The concert then proceeded.