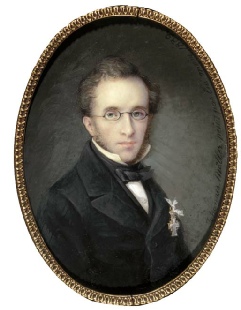 He was one of the most eminent miniaturists of his era. (Oxford Art Online)

Inscribed on an old label attached to the reverse of the frame of a painting of his father:

[This painting can be seen online at http://www.royalcollection.org.uk/collection/420822/peter-asmus-moller-d-1858]

'This picture is the Portrait of my dear Father P. A. Möller - The original of which I painted from life in Lübeck 1844.  That picture principally was the cause that the royal Akademy in Copenhagen asked me to paint the portrait of our King Christian VIII as a reception Picture as RA, which I became, the 16 December 1844.  It has got the honourable place over the President’s Chair in the Akademy. - The day following,  the 17 December I was nominated Professor.  The picture was exhibited in Paris 1845 and through this and other pictures, I gained the Gold medal and Louis Philippe asked me to paint his Portrait in Miniature. - When I came to London 1850 Prince Albert saw it and desired to buy it for the purpose of placing it between his collection of old masters at Windsor where it is now.  It was exhibited at the Royal Academy,  Lon: 1851.   This is the Copy of the original Picture painted by myself. - Johannes Möller.'

FUNERAL OF A DISTINGUISHED ARTIST.

Chevalier Johannes Möller, R.A., was interred, last Tuesday, in the Hastings Cemetery. Deceased was a person of great distinction, and, at an early age, he was brought much under the notice of King Christian VIII, of Denmark, whose friendship he enjoyed until the death of that distinguished sovereign. …………

Some time after this, at the invitation of Emperor Alexander II, he went to the Russian capital, when he painted a portrait of all the members of the Imperial Family.  In all, he painted portraits of some 25 Royal personages, besides a large number of nobility and gentry of the various countries of Europe, among whom we may mention her Majesty Queen Victoria, H.R.H. Prince Albert, the Emperor Alexander II of Russia, the present Emperor of Russia, King Christian of Denmark, and Queen Caroline of Denmark, King Oscar I of Sweden, Queen Josephine of Sweden, H.R.H. the Prince of Wales, H.I.H. the Duchess of Edinburgh.

He returned to England in 1856, where he spent the remaining years of his life, and up to within two months of his death, which took place in St Leonards, on the 30th October last, at the ripe age of 71, he was fully occupied, and never ceased to take a deep interest in his art.

His funeral, which took place on Tuesday last, was attended by a large number of relatives and friends of the deceased artist, among them being his son-in-law and daughter, Mr and Mrs Edward Allen, Sir James Colquhoun, Bart., Sir J and Lady Anderson, Dr S White, Mrs Thomas Russell, and Mr W J Glover.

A simple and most impressive service was conducted in the Presbyterian Church, Warrior Square, of which he was a member, by the Minister, the Revd J Jeffrey Johnstone.  The coffin, which was placed in front of the Communion rails, was completely covered with a large number of beautiful wreaths and flowers. ………..