BC C02 - only a faint trace of a kerbstone remains.

He was born in 1803.  After attending lectures and surgical practice at St. Bartholomew's Hospital, London, he studied anatomy in Paris.

He practised medicine at Camberwell for eight years.  In March 1835, he obtained the Fothergillian gold medal for his essay on 'Puerperal Fever,

In 1845 he published most popular of his books, 'The Power of the Soul over the Body,' which reached a sixth edition in 1868.  He was an early proponent of British Israelism and turned to writing on history and religion.  In 1848 his health obliged him to seek comparative retirement at Tunbridge Wells, but he returned in 1857 to Hastings.  Here he passed the rest of his life, engaged in literary work, and, till within a few years of his death, in medical practice.  He died here on the 30 October 1880.

He was married three times (his first wife having died very shortly after marriage), and by his second wife, who died in 1850, he had several children, who survived him. He was a man of very high moral and religious character, and of considerable learning.  In 1840 he published a work on 'Infant Baptism Reconsidered,' being a Baptist by conviction, but in his latter years he attended Congregational or Church of England services.

In later life he composed many hymns and short religious poems, some of which appeared in the 'Hastings and St. Leonards News'. 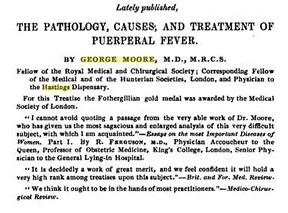 From Hastings Considered as a Resort for Invalids: With Tables Illustrative of Its Temperature, Salubrity, and the General Character of the Climate, Showing Its Suitability in Pulmonary and Other Diseases by James Mackness