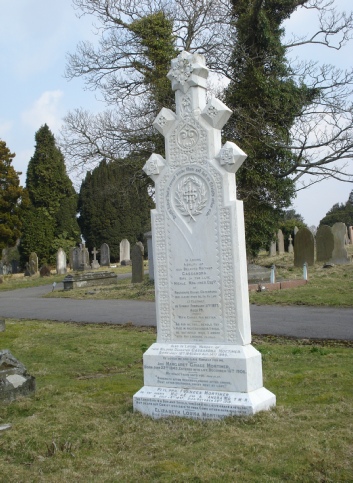 Death Hides! But it cannot divide, thou art but on Christ's other side

In loving
Memory of
Our beloved Mother
Cassandra.
Wife of the late
Michael Mortimer Esquire
of
Rockshire House, Waterford.
Who passed from death to life
at Hastings
on Sunday February 11th 1877
Aged 73

As for me I will behold
thy face in Righteousness.  I shall
be satisfied when I awake
with thy likeness"

"He loved me and gave Himself for me"

"Strength after weakness, crown after cross
Rest after weariness, sweet rest at last."

Philippa Frances Mortimer
Youngest daughter of Michael and Alexandra Mortimer
Born July 28th 1847, Died October 28th 1916.
"The Lord God is a sun and shield, the Lord will give grace and glory
Not death but Christ who said to thee, Come hither, oh friend to me."

Her husband was a solicitor in Ireland.  He was elected to the RDS in 1840. Address: The Mall Trinity Without Waterford

The plot is a double plot, Cassandra is listed at AM D10, and the daughters at AM D09

We know little about them, but in the 1891 census the daughter Cassandra and her sisters are living on their own means at  19 Warrior Gardens

Their ages at death were: