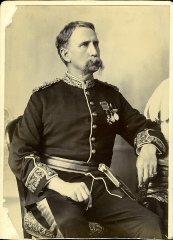 Malcolm Hassells Nicolson married Adela Florence,  the second of three daughters to Colonel Arthur Cory and Fanny Elizabeth Griffin. Her father was employed in the British army at Lahore, and thus she was raised by her relatives back in England.  She left for India in 1881 to work for her father.   Malcolm was much older, but a talented linguist, he introduced her to his love of India and native customs and food, which she began to share.  This widely gave the couple a reputation for being eccentric.  After he died as the result of a prostate operation, Adela, who had been prone to depression since childhood, committed suicide by poisoning herself and died at the age of 39 on 4 October 1904 in Madras.  She is buried in her husband's grave.  Her son Malcolm published her "Selected Poems", originally published under the pseudonym, Laurence Hope, posthumously in 1922.

Many stories have been written about Adela, known as Violet, including a novel based on her life, https://salute.co.in/fascinating-life-and-times-of-an-army-wife-in-india/ is just one of many to be found on the Internet. 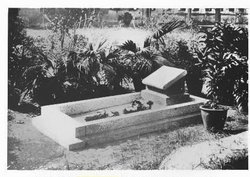 Their grave is an overspill burial ground - in the southern Indian city of Chennai (formerly Madras). It's located a couple of miles from its 17th-Century mother church, St Mary's, the oldest Anglican church in Chennai

In Loving Memory of MHN: The Souls of the Righteous are in the Hands of God”.

The headstone, raised after the cross was moved to the foot, is inscribed: ‘Lt. Gen. Malcolm Nicolson BI: CLI. Died 7th August 1904. “Whose soul was noble.”

And his wife Adela Florence.