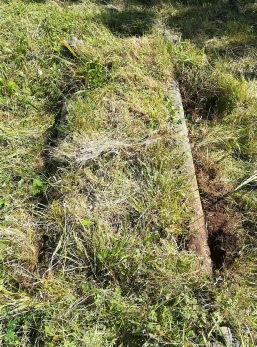 In the 1891 census they were living at Wellington Cottages, Wellington Mews, with their 2 year old son Thomas.  His occupation is Town Postman.

A tragic story of the deaths of a married couple within two days of each other was told at an inquest held on Monday at the Royal East Sussex Hospital, on Thomas Frank Noakes aged 63, a retired postman. of 6, Stonestreet, Hastings.

It was disclosed during the inquest that Mrs. Noakes died February 26th, and that her husband succumbed under an anaesthetic during an operation at the hospital two days later.   The deceased man's son, Mr. Thomas Samuel Noakes. 21, Linden-grove, Sydenham, said his father,

Mr. Noakes had enjoyed excellent health except for minor illnesses.

Witness came to Hastings on the death of his mother, and his presence appeared to cheer his father up.  At breakfast time on February 28th, he complained of violent internal pains. Dr. Daunt called about ten o'clock and prescribed treatment, but the pains continued.  Dr. Daunt came again about 9 p.m., and immediately ordered his removal to the hospital.

Witness was told there would be an immediate operation, and was later informed that his father had died.

The cause of death was peritonitis, and was probably accelerated by the administration of the anaesthetic and the operation.  The Coroner (Mr. H. C. Davenport Jones) — From what you found at the post mortem, the case was absolutely hopeless? -  Yes, I should think so.  And an operation was the only possible chance? — Yes.  Asked by the Coroner if he wished to hear Dr. Derrick Martin's evidence, Mr. Noakes replied "No, I am perfectly satisfied that everything possible was done for my father at the hospital."  Returning a verdict of "Death from misadventure," the Coroner expressed sympathy with the relatives, remarking their trouble was accentuated by Mrs. Noakes' death only a few days previously.

THE FUNERAL. There were moving scenes at the funeral, which took place Tuesday at the Borough Cemetery.  Quite a crowd gathered in Queen's-road as the cortege passed the route to the cemetery. Twenty-six postmen, an inspector and two assistant inspectors paraded at the house, and walked behind the body of their colleague, while six postmen. Messrs. T. Vidler (head postman). G. Reeves, H. Hubbard, A. Smith, T. Simmons, and C. Beartup, acted as bearers.

The cortege was headed by the body of Mrs. S. J. Noakes, on whose coffin was placed a single wreath from her husband, for which he had arranged before his death.  At the cemetery the cortege was met by guard of honour consisting of the uniformed postmen, clerical staff and 22 post office pensioners.  An impressive service was conducted by the Rev. W. A. Smith, of Christ Church, Ore, in the church, which was too small to accommodate the number of friends who had gathered.

The committal at the graveside was even more impressive.  The remains of Mrs. Noakes were lowered first into the grave, and then the six bearers lowered the remains their colleague, and there was scarcely one dry eye among the huge crowd gathered there.