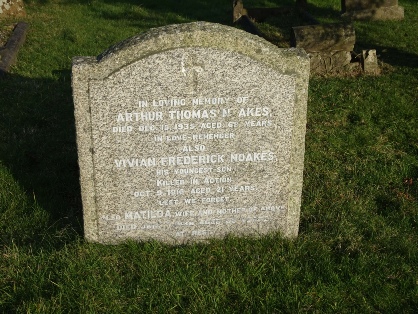 Also Matilda, wife and Mother of the above
Died January 1938, aged 68

Vivian Frederick Noakes was a clerk in a shipping office.  He lived with his parents and two brothers in Wilton Road, Barnet.  He became a rifleman with the London Regiment (Queen Victoria’s Rifles).  He is remembered on the Thiepval Memorial.

His father, who was born in Hastings, was working as an ironmonger.  It would appear that his parents returned to Hastings, as they both were mentioned in the Hastings & St Leonards Observer at the times of their respective deaths.

The family desire thank all friends for their tributes and messages sympathy. The funeral arrangements were carried out by Messrs. Douglas C. Mercer and Son, 29, Sedlescombe-road North, Silverhill, St. Leonards, and gave great satisfaction.