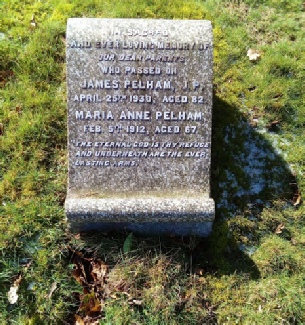 and ever loving memory of

The eternal God is thy refuge

And underneath are the ever-

DEATH OF MRS. PELHAM. —:A LOSS TO THE POOR OF ST. LEONARDS.  The death occurred in St. Leonards, Sunday night, of Mrs. Maria Anne Pelham (wife of Councillor James Pelham, J.P.), at her residence, The Hawthorns, Beaufort-road.  By her death the poor have lost a sincere friend, for Mrs. Pelham took the deepest and kindliest interest in their needs.  Her death will be keenly regretted by them.  The deceased was the daughter of Mr. Joseph Parker, and her brother is ex-Alderman Parker, who was formerly a member of the Hastings Town Council.

For some years Mrs. Pelham was associated with the Sunday School of the Old Wesley Chapel. Bourne-street,  and after her marriage,  years ago, with Councillor Pelham, became a member of the Norman Road Wesleyan Chapel.  Here she was one of the most active Church workers, and always took the warmest interest in the welfare of the young people.  Councillor Pelham, it may be mentioned, is superintendent of the Sunday School, and altogether has been connected with this work for 48 years.  Mrs. Pelham was ever ready to help on the various social and charitable works connected with the Church, and in the homes of the poor she was greatly loved.

About four years ago deceased sustained a fall in the house, from which complications ensued, and last year it was necessary for her to undergo a very serious operation.  From this she rallied, but was unable to walk, although she enjoyed sitting in the garden during the past summer.  Five weeks ago Mrs. Pelham had a very serious relapse, which culminated her death peacefully during her sleep, on Sunday midnight.

The funeral took place Thursday, special short service being held in the house prior to interment the Borough Cemetery, conducted by the Rev. W. J. Tucker and the Rev. Edward Hawker, who also officiated at the Cemetery.  The well-known hymn was sung, " Rock Ages."

A large number of floral tributes were received - Wreath. "In ever-precious memory of my dearest Lilie, the brightest and best helpmeet, from her loving husband;'' wreath, “Never gone from memory or from love. But our Father's Home above” from her loved and loving children, Annie, George, and Jessie; [many more tributes listed in the report]

The officers and teachers congratulated Mr. Pelham on of his ardent service in the School, 30 years of which had been spent as Superintendent. (Applause.)

The Chairman referred to the 50th anniversary of his good colleague. (Applause.) They had many good letters from old scholars. and they never had one without reference to Mr. Pel ham.   He had been a colleague of Mr. Pelham for 21 years-(renewed applause)—and paid his own personal tribute.  The Chairman made the presentation of a purse of money and a book containing the names of the subscribers .   Councillor Pelham  responded with great feeling and much surprise.   He expressed gratitude for health and strength for so many years, and for the universal kindness.   When young he had a bad attack of rheumatic fever, and he was ordered the seaside.   He had been a teetotaller all his life, but the beautiful air of St Leonards had made him what he was.  The Rev. H. V. J. Angel added his congratulations.  The anniversary had been very happy.   He wished it was not his last at  Norman Road.  He admired the splendid spirit of the workers in the School.

Hastings and St Leonards Observer - Saturday 26 April 1930
Loss to Hastings
Death of Mr. J. Pelham J.P.
Great church and municipal worker
Hastings lost yet another  of its most prominent townsmen by the death of ex- Alderman James Pelham, J.P. who passed away at his residence, 31, Sedlescombe-road South, early yesterday (Friday) morning.

Born at Tenterden, Kent, Mr. Pelham was 81 years age.   He came to Hastings when only 16 years of age and entered the drapery I business.   Later he acquired an establishment of his own in London-road. which he carried on until about five years ago.   He was elected to the Town Council as a representative of the Silverhill and Hollington Ward and was subsequently raised to the Aldermanic Bench in 1917, from which position he retired two years ago.

Mr. Pelham was very popular amongst his colleagues on the Council, and his geniality and love of justice and fair dealing won for him the respect of all.  In 1911 became a Justice of the Peace and took his seat on the Bench with conscientious regularity.  Although Mr. Pelham devoted a great deal of time to the town's work his church came first, and he took an 'active and leading part in the life of  Norman-road Wesleyan Church throughout the whole of his residence in the town.   He held almost every office open to the layman, and until quite recently was treasurer to the trustees at Norman-road.

He had been a trustee of the church for nearly fifty years, and was also a trustee to the Park-road, Ninfield, Little Common and Sackville-road churches.  He was a class leader and Sunday School superintendent at Norman-road, and also held the office of circuit steward.

When the building was burnt down in 1900, he was appointed treasurer of the reconstruction fund, and with the then minister and others worked exceedingly hard to secure the large sum necessary for the rebuilding.  He was keenly interested in education, and in addition to serving on the board management of the Christ Church, St. Leonards, and Tower-road Schools, was a member the Education Committee for over 10 years, retiring some eight years ago.

One of the oldest members of the Hastings Permanent Building Society, he served on the board of directors, and only retired from the office of vice-chairman on the first of this month.

Although a keen Liberal, Mr. Pelham was not a prominent member of the Liberal Association, but served on the executive committee for some time.   Mr. Pelham married Miss Parker, Sevenoaks, who died tome 16 years ago.  He leaves a son and two daughters, one in Vancouver, to whom sincere sympathy will be extended.  Mr. Pelham had been in failing health for two weeks, and the end came with wonderful peace.