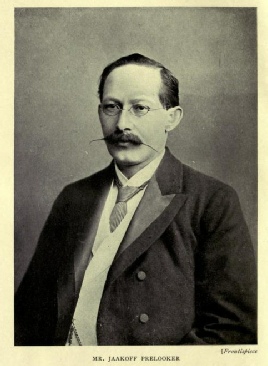 There is a lot of information available on Jaakoff Prelooker, in his own writing, apart from many other sources.  But his story surely warrants some acknowledgement here.

In the summer of 1897, Jaakoff Prelooker, a Russian-Jewish convert to protestant  Christianity, established an anti-Tsarist organ, The Anglo-Russian, with the aim of building mutual affection between England and the Russian people.

Jaakoff Prelooker was born in 1860 in the town of Pinsk, Western Russia, (now Brest Province, Belarus ) under the roof of his paternal grandfather, with whom his parents lived. The grand- father was a celebrated Rabbi of the picturesque old- fashioned type,

Born into a strictly orthodox Jewish household where only Yiddish and  Hebrew were used, he learnt Russian from Jewish boys who had been forced into the Russian schools set up by Alexander II to force Jewish assimilation into Russian society.

In the summer of 1880 Prelooker passed his final examinations, received his schoolmaster's certificate, and shortly after was appointed assistant master of the Second Government School for Jews at Odessa.

At the beginning of 1882 he published an article in the Odesskiy Listok in which he proclaimed the 15 principles of a sect to be known as New Israel, whose objective was to introduce reforms in the Jewish religion which would reconcile it with Christianity.

Somewhat unkindly The Jewish Messenger, September 12, 1890 reported “This sect consists of Mr. Priluker, who is the only founder, only advocate, and also only member.”

This is refuted in several other accounts e.g  “Shortly afterwards the "Spiritual Biblical Brotherhood" [The founder of this "Brotherhood" was a local teacher and journalist, Jacob Gordin] fell asunder.  Some of its members joined a like-minded sect in Odessa, Jacob Priluker’s ‘New Israel’."  (From History Of The Jews In Russia And Poland : From The Death Of Alexander I Until The Death Of Alexander III, by S.M. Dubnow)
And: “His harassment by Russian authorities commenced when New Israel started attracting members of Christian sects.”