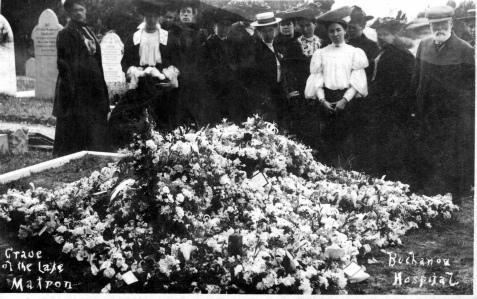 For 14 years Matron of Buchanan Hospital

This area, near the OHPS/FoHC seat, is currently being allowed to flourish for wildlife; it is very pretty, but the grave cannot be clearly identified.

The sad death of Miss Ransford, matron of the Buchanan Hospital, St. Leonard’s-on-Sea, in a serious motor-car accident, on Thursday, June 28th, has shocked a very large circle of friends.  Miss Ransford had been for 14 years the matron of the Buchanan  Hospital, and was most highly respected in the town, as well as being greatly beloved by her fellow workers, and the patients who came under her care.

The event was made the more sad from the fact that the deceased was looking eagerly forward to the re-opening of the hospital, after having been closed for the purpose of making certain very necessary improvements, in which she had taken the keenest interest. She will be very greatly missed by the authorities and friends of the hospital.

TERRIBLE MOTOR FATALITY. SAD TERMINATION TO PLEASURE TRIP. ST. LEONARDS LADY KILLED AT CRIPPS’S CORNER, Hastings and St Leonards Observer - Saturday 30 June 1906
The news of a most appalling motor catastrophe startled Hastings and St. Leonards Thursday evening.  Consternation spread when it became known that Miss Ransford, the respected matron of the Buchanan Hospital, had been killed and others injured.  The news cast a gloom over the town.  It appears that Thursday afternoon a party, chiefly ladies from St. Leonards, had arranged for a pleasure trip to Hawkhurst, in a motor car.  ………. The members of the party were nearly all intimate friends, and most of them have been associated with the Buchanan Hospital. ……A start was made from the Buchanan Hospital about 3.15. The route was by the Harrow and down the hill to Sedlescombe, and on to Cripps’s Corner.

The country through which the car passed, and that which would have been traversed towards Hawkhurst, is the favourite area for drives and excursions from Hastings.  Everything went well until 4.15, when the car was descending the hill on the New-road between Cripps Corner and Bodiam Junction.  Then the car seems to have swerved from side to side.  It ran towards the hedge and turned over its side.  Miss Ransford, Mrs. Westbrook, and the chauffeur, who were sitting in front, were partially under the car.  Miss Ransford was killed on the spot.  Miss Westbrook and the driver were injured, and the other occupants were thrown out and more or less bruised and shaken.  It was some time before a sufficient number of men could summoned from the neighbourhood to assist Mr. Jordan in lilting the car.  Miss Ransford had been found to be beyond the reach human skill, but everything was done that could be done to alleviate the sufferings of the others.  The driver was badly hurt, and was apparently suffering from concussion. ………The body of Miss Ransford was conveyed to Cripps’s Corner to await the inquest.

THE LATE MISS RANSFORD, Hastings and St Leonards Observer - Saturday 21 July 1906
The following resolution was passed unanimously at a recent meeting the Board of Management the Buchanan Hospital: We desire to place on record our very high appreciation of the character and work of our late Matron. Miss A. C. Ransford, through 14 years of loyal service, and our deep sense of the loss which the Hospital has sustained by her death.  Her firmness as a disciplinarian, coupled with her tenderheartedness, won the esteem and the affection of all who worked under her. and it is our opinion that to her is owing, to a large extent, the ‘high tone which has marked the nursing staff of the hospital.  Her skill and carefulness as nurse caused her to be loved by the patients, while the regard felt for her by the inhabitants of the town was abundantly testified by the respect and sorrow displayed by all classes of persons on the occasion of her funeral.  Her career of usefulness is an example of well-directed energy, tenacity of application, and honest singleness of purpose.  She possessed the very gentleness of woman, and her large human sympathy could never allow her to turn a deaf ear to anyone in distress.  She died in harness - She has gone, and left us the lesson of her life.'-