Charlotte Ransom - AN A27

There are a lot of Ransoms in the cemetery, many of whom are
probably related to Charlotte.

Henry Alderton in whose family she served for so long was born
in Battle in 1780. In 1841 he was living in High St Battle with
his wife Harriet and 5 children, one of whom was Jane Verrall
Jones and a granddaughter, also Jane.  Charlotte was 16 and
the only servant in the house.  She herself was born in Bexhill.

By 1851 the family had moved to 3 Bedford, St Mary in the
Castle, Hastings, where Henry kept a lodging house.  Charlotte 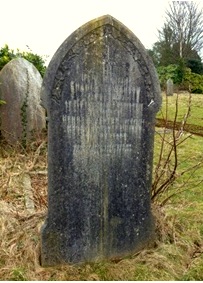 was now servant to the family and the lodgers, of whom there were two listed in the census. One of Henry’s sons, Henry Morcomb Alderton, was a grocer’s assistant but he was to die two years later at the age of 20.  Henry’s granddaughter Jane was a milliner’s apprentice.

Henry’s wife Harriet died in 1854 and Henry himself in 1858, but Charlotte stayed with the two Jane Verrall Jones  until her death in 1904.  Jane followed her father as a lodging house keeper, living first at 7 (later 37) Wellington Square until 1891, when they were recorded as living at 148 Mount Pleasant Rd.  Jane had retired as a Lodging House Keeper and was now living on her own means, as was her daughter.  At 67, Charlotte was still a domestic servant.  Shortly before her death in 1902 Jane had moved to 85 Mount Pleasant Rd, still with her daughter, but Charlotte, although still listed as a servant there, was said to be 17!  77 is more accurate.  She outlived her mistress by 2 years ,dying in August 1904 and presumably the younger Jane erected the tombstone.