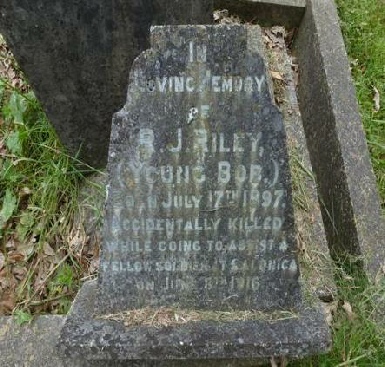 According to an account in the Hastings Observer of 24th June 1916 ‘at the time of the accident Private Riley was on his way to fetch a serious case to the ambulance about 8.15pm on 8th June when his mule bolted and threw him, rendering him unconscious and he passed away 2 hours and 10 minutes later without having gained consciousness, in spite of all efforts to save his life.

Private Riley was well known locally.  He was an old Grammar School boy, a member of the rowing and swimming clubs and the YMCA.

He won his life-saving certificate on his 15th birthday and had a most promising career in front of him.  He crossed from France where he had served one month to Salonica last October.  Mr Riley has received a letter of condolence from the Major of the Field Ambulance to which Private Riley was attached, in which he said the young soldier (he was not 19 years of age) showed great promise and was generally liked.’

His memorial stone is propped against the broken gravestone of a Hugh Watson, son of Edward and Annie Smith who died on 23rd June 1890 aged 6. It is not clear if this is the grave it is meant to be with as there are several broken gravestones around.

The Rileys were a local family although Robert Riley senior came from Folkestone originally.  He was a master tailor and employer, and by 1911 when the family was living at 32 Wellington Rd, Hastings they were able to employ a general domestic servant , 15 year old Lila Mary Finch. Robert Junior had two  younger brothers Harry and Francis.