It is with deep regret we announce the death of Mr Patrick Francis Robertson.

The sad event occurred at Hampstead, on Tuesday, at the residence of his brother, where Mr Robertson removed about two years since on the death of his sister.  Mr Robertson had reached the ripe age of 77.

For some thirty years no gentleman was better known or more widely respected throughout the borough of Hastings than the subject of this notice.  His hearty benevolence and genial nature made him the friend of all.  Although constantly engaged in the fore-front of political warfare his personal qualities and kindly characteristics won the respect of his Liberal opponents.  It was in the Chinese trade that he became affluent.  Between 30 and 40 years ago he settled down at Hastings, at Halton House, where he resided with his sister and Miss Small.

Mr Robertson was a supporter of every movement calculated to improve and benefit the local community .. In his early days, before he lost a considerable portion of his wealth from commercial collapse, he was ever to the fore in relieving the wants of his poorer brethren, and he was also in the true sense a leader of local society.

His mansion and grounds at Halton have been the scene of some of the most fashionable garden parties, archery meetings, and other gatherings.  At one period he was one of the most active supporters of the Hastings Mechanics' Institution, and on frequent occasions lent his beautiful grounds for fetes in aid of the funds... A Churchman of a decided type, Mr Robertson was a regular attendant at Halton Church, and one of the chief supporters of Halton Parochial Schools.  He was also a generous contributor to the funds of religious societies, and showed particular interest in the local branch of the Protestant Reformation Society, at the annual

meetings of which he frequently took the chair.

The Infirmary also had Mr Robertson's hearty support, and amongst other institutions in which he took a practical interest should be mentioned the local benefit societies.  At Halton he built a Working Men's Club, and did many other generous acts for the benefit of the working classes.

His younger brother James, at whose home he died, is remembered on the tomb also.

Youngest son of the late Revd. D Roberston B.D. of the University of St Andrews

"He walked with God and was not, for God took him." 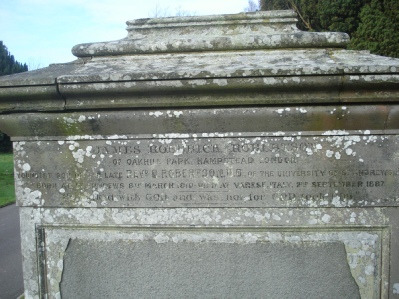