Formerly widow of the late

Robison, Agnes Rose, the second daughter of Agnes Warrand (Wilson) and Samuel Begg, of New Zealand, was born in London, on 27 July, 1851, and was educated privately.

She married secondly, on 23 October, 1901, at   St. Stephen's Church, South Kensington, London, William Cowper, second son ol William S. Robison, of Christchurch, New Zealand. Her second husband was born in New South Wales, on 26 May, i860, and was a Director of various companies.  They reside at Savoy Court, London.
(http://digital.nls.uk/histories-of-scottish-families/archive/95671783?)

Anglo-Colonial Notes, [Star, 4 December 1901]
Oct 25th 1901
At Stephen's Church, South Kensington, last Wednesday, Mr William Cowper Robison. second son of Mr W. S. Robison, late manager of the Bank of New South Wales, Christchurch, was married to Mrs Agnes Rose Carlile, widow of the late Mr James Wren Carlile, of Napier. The bride, who was given away by her brother, Mr Samuel Begg, wore a pale lilac brocade trimmed with Irish guipure, and a toque to match with white tips. Her ornaments were a diamond necklace, swallow and star.  Mr Robison's partner, Mr C. L. Gardiner, was best man.  The service was fully choral, the hymns sung being "The Voice that Breathed o'er Eden," " 0 Father all Creating " and " Thine for ever God of Love."

After the ceremony Mrs Robison held a reception at Bailey's Hotel, at which Mr Sidney Johnston proposed the health of the bride and bridegroom.  After the wedding party had been photographed Mr and Mrs Robison left for Dover, en route for Paris, where they will spend a week before joining the "Polynesian" at Marseilles on Nov. 2.  At the conclusion of their trip to New Zealand they will return to the flat which they have taken in Mortimer Mansions, Mortimer Street. 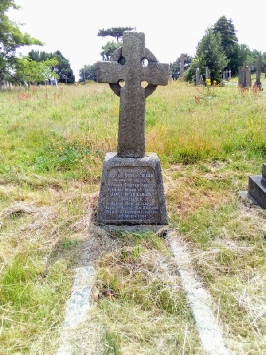