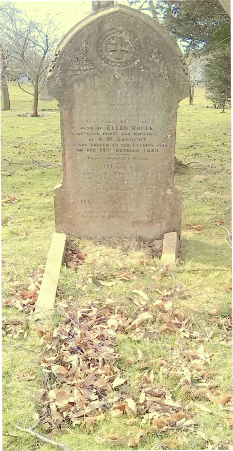 Mary A Sargent
Wife of A. W. Sargent
of Pevensey Road, St. Leonards on Sea
Who died 17th December 1912
Aged 74

Also of Ellen Rolfe
Devoted nurse and housekeeper of
A. W. Sargent
Who was called to her eternal rest
on the 14th October 1923

Forever with the Lord

Please note it hasn’t been possible to correctly transcribe all of the above.

Caroline and her brother Alfred were born in Launceston, Cornwall.

Mary’s husband, Alfred Warne Sargent, died in February 1926 aged 84 and is buried at BB A18

Mary Ann is recorded as the daughter of Samuel Brunwin of Wickford, gent.  In the same document Alfred is designated “of independent means”.  Mary and Alfred married in Braintree in October 1871.   In 1887 they are living at “Rangoon”, 9 Pevensey Road, St Leonards. [This mat later have been renumbered.]

Hastings and St Leonards Observer - Saturday 13 October 1923
The Senior Deacon of the [Congregational] church is Mr. A. W. Sargent, of 17, Pevensey-road. Age and ill health now prevent him from attending the services; but his interest is unabated, while his generous financial support has been freely given through the many rears he has been connected with the church.

Hastings and St Leonards Observer - Saturday 13 February 1926
A ST. LEONARDS BENEFACTOR.—The death occurred on Monday, 17, at Pevenseyroad, St. Leonards, of Mr. Alfred Warne Sargent, at the age of 84 years.  He retired from the Admiralty some years ago and came St. Leonards to reside.  He was life deacon of St. Leonards Congregational Church to which he was a most liberal supporter, one of his many gifts being the presentation of "The Manse" to the  Church.  He was very generous to many of the charitable institutions of the town, rarely refusing any appeal for help.

Alfred came to St. Leonards in serious ill health, so serious that his condition was regarded as precarious.  He came with his wife and household, having retired as an Admiralty clerk, and was on a pension.  He was one of the Church's most trusted leaders, and, as his strength allowed, one of its most devoted workers.  He was also one of its most generous benefactors.  It was to him that they owed the gift of a manse, the completion of the crgan, the addition of a choir organ on the occasion of the Church's jubilee in 1913, and a little later the defrayal of the larger part of the expense of installing the "discus" blowing-apparatus, the first such apparatus in the town, blown with the electricity supplied by the borough.  His personal kindnesses to such of his fellow-members as were in need of sympathy, counsel, a helping hand, would make a long and lovelv story could they be told.  He was a man full good work.  Nor did he limit them to that church.  He was friend and supporter of not a few causes connected with church, but aiming at the relief of the afflicted and the help of the unfortunate......