We regret to announce the death of Mrs. Anna Shipton, the well-known authoress, which took place on Tuesday morning at St. Leonards.  Mrs. Shipton, who had reached the advanced age of 86, had resided St. Leonards for some years, and she had for a long time been in feeble health, but the end came somewhat suddenly.  Her latter years had been spent in retirement, but her intellect remained wonderfully vigorous the last, and her faculties were generally unimpaired.  The deceased lady's husband pre-deceased her by many years, and she leaves no family.  She was a voluminous writer on religious and spiritual subjects, some beautiful hymns and many hundreds of leaflets coming from her pen.  Her poems were widely read.   Among her best-known works were Tell Jesus and "The Upper and the Nether Springs."  Earlier in her life she travelled extensively, and her writings are known in nearly all parts of the world.  Lately they have been circulated amongst our soldiers in South Africa, and she received very pleasing testimonies of their appreciation.

Touching tribute appears in The Christian of this week, as follows: —"As we go to press we learn with deep sorrow of the death of our old and beloved friend, Anna Shipton, known to multitudes of our readers all over the world by her helpful and spiritual writings.  Mrs. Shipton had been a great invalid for many years, but the home call which brought her eternal relief from much suffering was itself somewhat sudden." 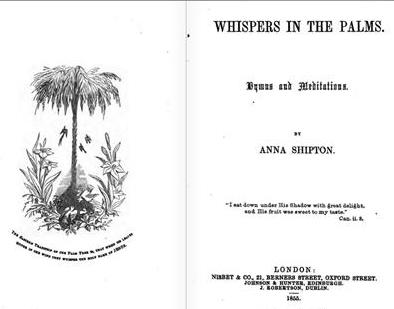