In the 1911 census the family are living at 11 Cranmer Grove, Nottingham and are shown as Kate Elizabeth Shrimpton 45 years old,  a widow, she is living with her children Lennox Dutton 17 yrs and Edith Janet 9 yrs

MR. A. J. SHRIMPTON. The death, of Mr. Alexander James Shrimpton took place Wednesday morning. at 52 South water-road, St. Leonards.  The deceased's family had been constant visitors to the town, and he also had two sisters in residence here.

The funeral took place yesterday (Friday) at the Borough Cemetery.  There were numerous wreaths.

The whole of the funeral arrangements were most satisfactorily carried out by  Mr. Arthur C. Towner, of Norman Road. St. Leonards. 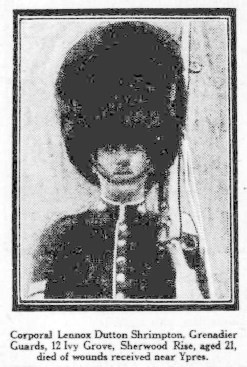 He landed in France on 22nd August 1914 and died of wounds received at Ypres on 5th November 1914 and is buried in Perth Cemetery (China Wall), West-Vlaanderen, Belgium

At the time of his death he was living at 12 Ivy Grove, Sherwood Rise, Nottingham. 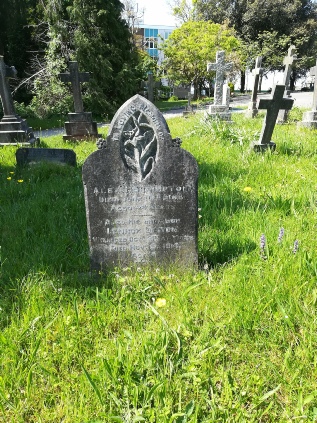 Also his Only Son

Alexander was born in 1865 in Alresford, Hampshire.   He married, in 1892  Kate Elizabeth Kaines, who was born in 1866 at Twford, Hampshire,The marriage was recorded in the Winchester Registration District.   He was a draper.  They went on to have 3 children, one of whom died in infancy.  Lennox was born in 1893 in Nottingham, as was his sister,  Edith Janet born 1902.