...........By the end of the nineteenth century, men like Arthur Banks Skinner were taking the haphazard knowledge of the hosts of Victorian collectors and connoisseurs and beginning to formalize it into the discipline that we now know as art history. ([the quotes in the book are from Skinner’s obit on the Times 9.3.1911] Magpies, squirrels and thieves: how the Victorians collected the world : Yallop, Jacqueline. pp.116-117)

This object history centres on the relationship between two understudied figures: Arthur Banks Skinner, director of the Museum and keeper of Department of Architecture and Sculpture, and John Henry Fitzhenry, collector and major benefactor of the V&A (Reading and Writing at the V&A : An episode in the collection of Italian Gothic sculpture by Peter Dent and Ettore Napione )

Mrs Bertha Julia Skinner, in recognition of the valuable services of her husband, the late Mr Arthur Banks Skinner, in connection with the art collections in the Victoria and Albert Museum, and in consideration of the circumstances in which she has been placed by his premature death...

“………A mark of what could be perceived as either extraordinary generosity or arrogance was his offer to finance a study-trip for the Keeper of Sculpture and Architecture, A.B. Skinner, with whom he maintained a friendly relationship. (44) Writing to Sir Cecil Smith on Skinner's behalf to petition for three weeks leave of absence, Fitzhenry made it clear he would organise and finance the trip himself. Evidently Fitzhenry very much saw himself in the role as 'tutor' imparting knowledge to a student (despite Skinner's professional expertise).

'I am so glad you find it feasible to let Skinner come for a three-week tour with me, in the home of the 'Arts' (Sculpture and Architecture, Italian and Greek, he is so saturated with). He has to 'chalk out' the tour, as I want him to see everything we can (in the time) likely to improve his knowledge and taste in those 2 categories.' “

The funeral of Mr Arthur Banks Skinner took place on Saturday at Hastings.  The Rev. C. Silvester Horne and the Rev. Dr. Armstrong Black, Presbyterian minister, officiated.  Mr Last, Mr Watts, Mr Martin and Mr Maclagan represented the Victoria and Albert Museum, with which Mr Skinner had been associated for more than 30 years.

Wreaths were sent from the Art Museum and the Science Museum, and the police of the Victoria and Albert Museum. Times, London, England 13 March 1911 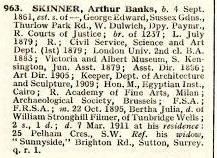