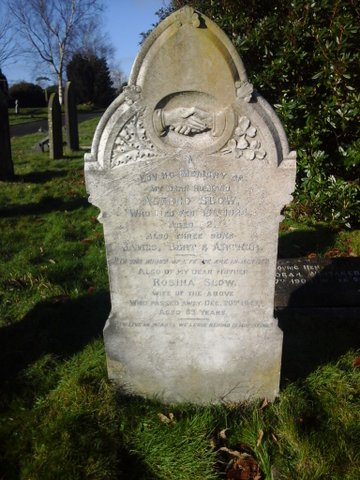 Also of my dear Mother

'To live in hearts we leave behind is not to die'

Arthur was born in 1891. Thomas Albert is presumably the Bert referred to on the gravestone, but so far we have no more information on him unless the Observer report below

Alfred’s death was recorded in the Observer:

An employe[sic] of the Corporation, Alfred Slow, was taken ill at Tackleway yesterday (Friday) afternoon about 1.30 and collapsed.  A number of people went to his assistance, but in spite of artificial respiration, he did not revive.  The Police ambulance was sent for, and the man conveyed to the Royal East Sussex Hospital.  On arrival at the institution, however, it was found that Mr. Slow was dead.  He resided at 53 Greville-road, Ore.  The facts have been reported to the Borough Coroner, who will decide if it is necessary to hold an inquest.

A slight mystery occurs in another HSLO report of the same year, note the address is the same -

P. C. Hoadley was driving his Enfield motor-cycle combination at the Memorial on Saturday about mid-day, when a cyclist, Alfred Thomas Slow, 53, Greville-road, Ore, attempted to pass between him and a stationary motor-ar [sic].  The cyclist was jammed between the two vehicles and thrown from his machine.  He was taken to the Police Station where he received attention to slight injuries.  The bicycle was badly damaged, both wheels being bent up.