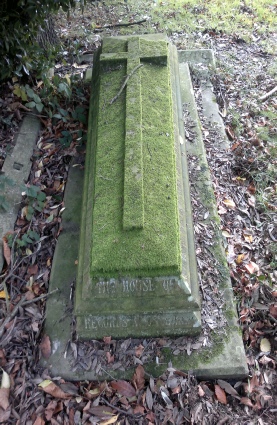 BIRTHS. On Sunday, the 11th instant, at Cosham Lodge, near Portsmouth, the residence of her father, J. H. Lethbridge, esq. Mrs. Geo. Stone of a daughter.

Ada Cicely Georgiana Lethbridge was the daughter of Sir John Hesketh Lethbridge, 3rd Bt, (The Lethbridge Baronetcy, of Westaway House and Winkley Court in the County of Somerset) who was married three times and had 18 children.  Her mother, Harriett Rebecca Mytton, was the second wife.

Julia Mary Stone was their daughter.

There are Stones, Lethbridges and Brownriggs in the Cemetery, but as yet we do not know why Julia is buried here.  The most likely reason is that she came here for her health, but it is not conclusive.