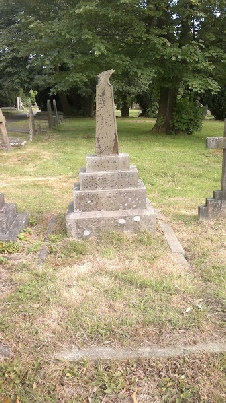 To the Beloved Memory of

Where we had lived together for 32 years

Father in Thy gracious keeping

Leave we here Thy servant sleeping

Also to the loving memory of

And of Mary Elizabeth Shedden Stonestreet

The Stonestreet sisters were the daughters of daughter of Rev. George Stonestreet,chaplain to the Guards at the Battle of Waterloo, who is in ll Saints.

Hastings and St Leonards Observer - Saturday 03 June 1882
FUNERAL OF MISS GWYNNETH STONESTREET. We have this week to record the funeral of Miss Gwynneth Agatha Sheddon Stonestreet, youngest daughter of the late Rev. George Stonestreet, Canon of Lincoln, who died last Sunday week, and was buried on Friday.  This lady has resided with her Sister at Warrior square for many years, and was a most zealous worker among the poor, and forwarding all charities for their benefit.  In the Sunday School, too, her place as a teacher of a class was rarely vacant, and in her the children have lost a true friend.  It is not too much to say that among the poor of her parish she was universally beloved for her general but unostentatious benevolence.

The funeral arrangements were carried out under the direction of Mr. W. J. Avery, of Norman-road, and use was made of the new-fashioned funeral car, with glass sides, which, on this occasion, gave an opportunity for the use of some of the innumerable wreaths and crosses presented by friends, in memory of the deceased.  The polished oak coffin was perfectly covered with choice flowers, and all round it were placed other loving remembrances from sorrowful acquaintances and from the Sunday School scholars, token of respect for the deceased lady.  The first part of the burial service was conducted at Christ Church, where the mournful procession arrived about one o'clock, and was received at the north-east door by the Revs. C. L. Vaughan, F. J. Smyth, J. Bray, and J. M. Rodwell, and the full choir in procession, preceded by the cross-bearer.  The coffin was carried in and placed on trestles just outside the screen the nave of the Church, while full choral service was gone through.  ……… At the conclusion of this service some fresh flowers were added by friends among the large congregation, and the procession being re-formed, the coffin was carried to the hearse, followed by Miss Stonestreet  (sister of the deceased) Mr. and Mrs. Stonestreet, Miss Galloway, Mr. Hawthorne, Mr. George Trower, jun., Mr. Henry Allfrey, and four of the household.

The whole choir, too, accompanied the body to the cemetery, and again forming procession, met the body at the gates and preceded it, singing as they went to the grave, where the remainder of the burial service was solemnly gone through by the Rev. C. L. Vaughan. Standing over the grave three more hymns, suitable to the occasion, were sung, and among the large number present in the cemetery many were found who had brought with them tokens of respect, which, being added to those brought on the coffin, made a really grand display, and showed in some slight degree the universal esteem in which the deceased was deservedly held by all who knew her.

In Christ Church, and in connection with all its works of charities, she has been one of the most devoted and untiring workers, and it is a fact that many of its operations were for some time, great measure, supported by the munificence of herself and her sister.  Many, yet, do not realise the full extent of their loss, but will be found by one and all of her acquaintances, and more particularly by those that knew her best, that her place cannot be easily filled.—Advertiser. On Sunday evening Christ Church the Rev. E. Bray alluded to the deceased lady at the conclusion of his sermon.  He said they had lost valued friend, had laid her to her rest, and now mourned her. He believed they would greatly miss her in times to come.  He almost shrank from speaking of the work she had done for them, lest ought he should say would mar the memory of her life.  He would therefore confine himself to the facts of the case.  How she helped in building that Church some of them knew better than he did, but he could testify to the work she had done in that parish during the past seven years.

Her qualifications and accomplishments were varied and manifold, and of a kind not usually found the same person.  Advancing years had prevented her from doing all she would have liked, but her quiet geniality had always secured her the attention of her class of girls in the Sunday School, and the personal regard and love they had for her continued for a long period after school age was passed.  Her personal interest in the day school was simply invaluable, and who they were to look for to supply her place at that moment he did not know.  As band mistress of the Guild she had been found of great use, but the duty which her success was most signal was that of visiting the sick and the poor.  She had a large measure of tact and kindly sympathy, not indiscriminately, and that was one of God's best gifts to woman.  He believed it was not the value of the gifts so much that were prized as the kind words, little acts of thoughtfulness, and deep personal interest, which the poor people knew she took in them, and that made her visits the more welcome. Whether it was bed-ridden child, or mother struggling against the cares of family, or a poor old woman in declining years, it was all as one. The task of life, however, was done, and hers was really rest after labour. It was sinful to repine, although some natural tears must be shed. She was still in safe keeping, and this God had dealt with them as with her —or good.