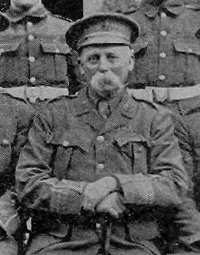 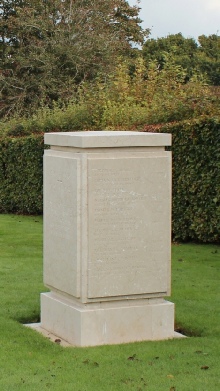 Major Edmund Teed died died at his home in Hastings on 25 November 1914.

He was honoured with a full military funeral on Monday 30 November and was interred at Hastings Borough Cemetery.

His grave has since been lost and he is commemorated in Hastings Cemetery on Screen Wall. K C. D01.

SOLDIERS' AND FREE MASONS' TRIBUTES
Not for years has Hastings witnessed a military funeral of such imposing character as that of Major E. Teed, of the 5th Cinque Ports! Battalion. Royal Sussex Regiment (formerly of the Rifle Brigade), on Monday afternoon.

About four hundred of the Royal Sussex, including the escort of two hundred with the firing party, and a number from the Tower of London, attended.  These were drawn up in front of Stewart Villa. Ashburnham-road, the residence of the deceased Officer. Colonel C. H. W. Cafe. J.P., so long associated with the Regiment, was present.

The Officers of the Royal Sussex who were present included Lieut.-Col. F. G. Langham. Lieut.-Col. Lloyd,. Major E. H. Langham 'who was in command of the escort), Captain E. A. Mansell and Captain Hornblower (who was In charge of the escort from the Tower).

The coffin, of polished oak, was draped with the Union Jack, and upon it were placed the sword, cap. and belt of Major Teed, and some of the floral tributes. Many other beautiful wreaths were conveyed in an open carriage.  An impressive effect was felt when the escort presented arms and the   Officers saluted as the coffin was brought from the house.  The chief mourners included —The Misses Teed (daughters of the. deceased), Mrs. Hoskins (sister), Mr. A. Teed (brother) Mr. R. Teed (nephew). Captain E. Morgan. Major Wadham, Mr. William Mason and Miss Rodway.

The Freemasons who followed or were present at the Cemetery included: Hastings Lodge. No. 2.92 (of which Major Teed was S.W. at the time of his death), ………..

In spite of the tremendous downpour of rain, the upper part of Aahburnham-road and the streets of Ore were lined with spectators.  Blinds were drawn, and marks of respect were shown.  The Battalion Band, under Bandmaster T. H. Ritch,  played a slow Funeral March as the cortege wended its way. The drums were covered with crepe, and the escort marched with arms reversed.  In Ore Village the Band ceased playing, and the slow march was changed for a quicker pace, which was continued along the road to the Cemetery.  Spectators lined the pavements, and many followed to the Cemetery, where already some hundreds had braved the rain and the wind, which had increased to a gale. At the Cemetery Gates the Band played Chopin’s “Marche Funebre”.

The chief mourners, the Officers, and the Freemasons filled the little chapel.  The Rev. T. W. Cook (Rural Dean) officiated there and at the graveside.

The firing of the three volleys, and the roll of drums, followed by the bugles sounding the ”Last Post" gave great solemnity to the final notes.  The Masons cast their sprigs of acacia into the grave.  Wreaths, etc., were sent by [numerous families and organisations]