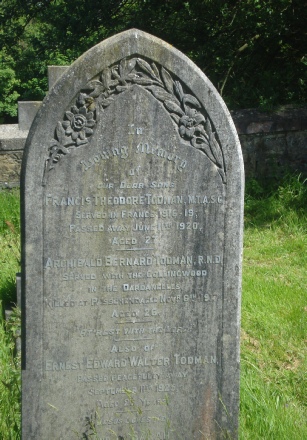 Served with the Collingwood

'At rest with the Lord'

He had originally been posted missing in action, assumed killed.  He is remembered on the Tyne Cot Memorial. The Hastings Observer of 29th June 1918 includes the following report. 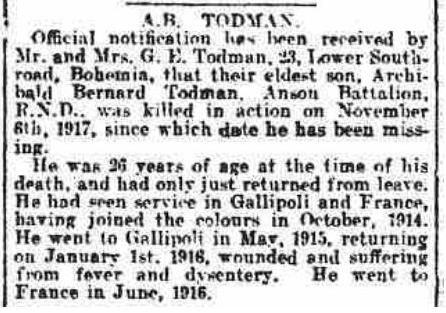 Archibald was born on 10th March 1892 in Hastings.  His parents George and Sarah were not locals, he coming from Chichester and she from Bedfordshire, but they had obviously been settled in Hastings for some time as  in 1901 they were living at 11 Horntye Rd.

There were five children, Theresa (11), Archibald (9), Francis (7), Louisa (5) and Ernest (2).  George Todman was a saddler and harness maker.  All the children were born in Hastings except Theresa who was born in Islington.

In 1911 George and Sarah were living at 23 Lower South St. with four of their children, all of whom were born in Hastings.  Archibald (18) was a porter for an Oil and Colour Merchant, his sister Louise (15) was ‘at home’ and his two younger brothers Ernest Edward (11) and Percy Henry (9) were at school.  His father was still a saddler and harness maker and described as a jobmaster.

Archibald volunteered in 1914 and enlisted on 27th October of that year. He was described as 5’ 5’’tall with a