In affectionate remembrance of

Thy will be done

Loved and respected by all who knew her

Tilden Tolhurst and his wife Ann are buried in Hastings cemetery among the retired military men, the daughters of gentlemen, and the servants of empire. Tilden, who was a local publican, had led a more interesting life then his respectable resting place might lead one to suppose.

He was born in about 1810, in Westfield.  In 1839, at the age of 29, he makes his first appearance in records, appearing at Lewes Assizes accused of sheep stealing, one wether-sheep valued at forty shillings, the property of Robert Hawes Senior of Westham.

Tilden, described as a butcher, and his relative John Tolhurst, a huckster from Hastings, were seen driving a borrowed cart containing cuts of meat.

Tilden and John Tolhurst were sentenced to ten years transportation.  However they were not sent to the colonies to serve their sentence, but spent the term on a prison hulk, the Leviathan, at Portsea Town.  Tilden was listed as an inmate on Census night 1841, and prison records note that he was pardoned on October 30th 1844.  No reason was given for this pardon. 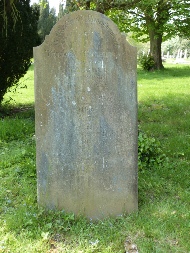