The stone is fallen, and so the details for Otho Robert cannot be read;  on the reverse is a memorial to his son:

Also to his only son

Marriage of Miss Barnard ,of Harlow.—Miss Eliza Broughton, eldest daughter of the late  AVM. Barnard, of Harlow, was on Wednesday married to Mr. Otho Robert Travers, a gentleman who is well known and respected in the medical profession, now in practice at St. Leonard’s.

Their son, Otho Boyle was born in Hastings in 1879.

Otho Robert was a doctor and surgeon.

The 1891 census shows them living at San Nicholas London Road, Otho B is 11, and they have a daughter, Muriel, aged 7.  There are three servants. 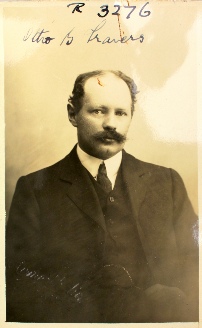 Otho Boyle Travers, was a successful scholar at school – “Otho Travers, pupil Winchester School, and son of Dr. Travers, of London-road, Leonards, was one of successful candidates for scholarships.  He went on to become a doctor himself.

New South Wales Medical Board has a record of an Otto Boyle Travers;  his name is recorded under this spelling elsewhere .