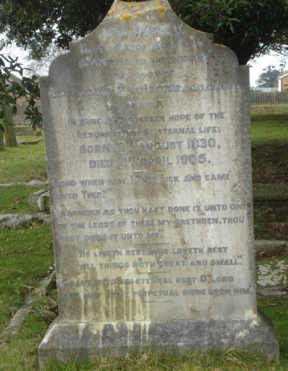 Here in God's acre was

Committed [?] to the ground

In sure and certain hope of the

'Lord when saw I thee sick and came

"In as much as thou hast done it unto one

of the least of these my brethren, thou

hast done it unto me"

"He liveth best who loveth best

All things both great and small."

And may light perpetual shine upon him.

Thomas Trollope was born on 12 August 1830.  He was the son of Thomas Trollope and Mary Canning.  He married Esther Sarah Huffam, daughter of Captain J. A. Huffam, on 13 February 1858.

He graduated from Cambridge University, Cambridge, Cambridgeshire, England, with a Doctor of Medicine (M.D.).  He was registered as a Member, Royal College of Physicians, London (M.R.C.P.).

He bequeathed £1000 to Christ Church, St Leonards for benefit of the sick and poor;  the income from this in 1931 was £40.16s.2d.  There was also £300 from his legacy used in 1907 to replace the font, in his memory,  the new one being designed by Sir Arthur Blomfield (the original architect).  Dr Trollope was an unofficial churchwarden for Christ Church, St Leonards pre-1884; appointed for 1885-93.  He also bequeathed £500 to St Paul’s church for curates’ stipend; with a further £500 for general church purposes; income for the two charities, £33 in 1937

Bequest to Brassey Institute [HMAG} by Dr Trollope, of painting by Henry Brittan Willis ‘A drop at the fountain’.

Death of Dr T Trollope at his residence, 9 Maze Hill, on 21 April.  He was a highly rated physician, aged almost 80, who came to Hastings in the early 1860s and was lately the chief honorary surgeon at Hastings Hospital.  He had a stroke a few months before.  He was said to be the best friend of the poor.  He was also a senior Freemason, having been a past Grand Deacon of England and holder of many other top posts.  His imposing funeral on the 27th was masonic, with 40 carriages following the hearse along the seafront to the cemetery.

There was a very large turnout of masons.