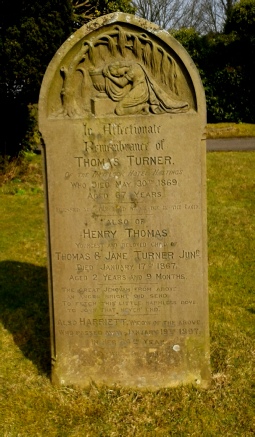 Blessed are the dead which die in the Lord

The Great Jehovah from above
An angel bright did send
To fetch this little harmless dove
To joys that never end.

Also Harriett, widow of the above
Who passed away January 19th 1897
in her 84th year

Thy will be done

Harriett was born 30 May 1813 to Richard and Anne Hunnisett

In 1851 they were running 'The Queens Head' Seddlescombe and in 1861 a hotel in Havelock Road, Hastings. (http://www.hunnisett.org.uk/tree/richard1776.php)

1871 Census shows, as well as two servants and several visitors,

For information on the history of the Havelock Hotel see http://www.hastingspubhistory.com/page19.html