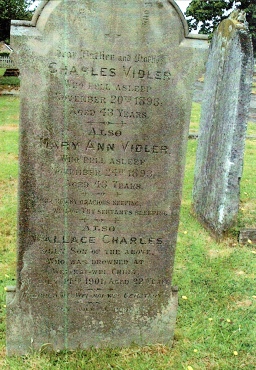 This photo was taken some time ago, a recent visit reveals only empty space where it once stood.  It may have been removed under the HSE regulations for the Safety of Memorials in Cemetries.  The photo below shows the area as it is now. (2019) 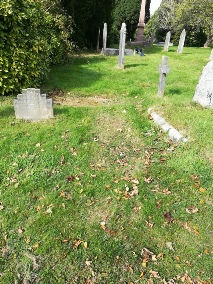 Father, in thy gracious keeping
Leave we now thy servant sleeping

In 1893 the Vidler family had lived at 88 Stonefield Road in Hastings. . Charles Vidler had started out as a painter and decorator but had gradually built up an extensive business as an undertaker.  He had a close connection with the church of St Andrew, where he and Mary Ann Wingfield had married in 1874.  Their children had been baptized there.  Charles was an overseer of the parish and had become a churchwarden.  Charles was also active in local politics, being a Conservative and President of the Lower St Mary’s District Association.  He often assisted at Election times in Holy Trinity Ward.

Hastings and St Leonards Observer - Saturday 25 November 1893
MR. AND MRS. CHARLES VIDLER. HEARTRENDING CASE
Mr. Chas. Vidler passed away his residence in Stonefield-road. Hastings, on Monday morning last.  The news, as it spread through the town at the beginning of the week, was received not only with general and deep regret, the deceased having been widely respected, but with considerable surprise, very few knew that Mr. Vidler was seriously ill, and it was not many days ago that he was seen about in the ordinary way.  But a chill which he took while conducting a funeral at Battle last Monday week took a bad turn, congestion of the lungs supervened, and notwithstanding the efforts of Drs. Nicholson and Trollope, his illness terminated fatally an early hour on Monday last, the all too early age of 43.

The deceased's life had been an active one and his premature demise will much deplored by a large number of people, whilst in some cases it will involve a loss that it will not be easy to replace.  Although a busy man on his own account, Mr. Vidler never shirked those public and semi-public duties which must devolve upon someone for their due discharge, and having once taken up a thing he did all in his power, with persistent application and energy, to do it thoroughly.

Years ago, in the time of the late Rev. John Parkin, he officiated as verger at Halton Church, subsequently filling a similar position at St. Andrew's during the tenure of the late Rev. George Hodges, by whom, and also the Rev. A. Hodges, he was highly esteemed.  When the Rev. A. V. W. Carden succeeded to the ministry at the Queens-road church he was elected people's warden, an office which he had worthily filled ever since, being re-installed every year.

At the time of his death he was senior Overseer of St. Andrew's parish, which he represented the Board of Guardians, having been elected to that body when Mr. Cook retired from the Poor Law Authority.  A real friend of the poor, those afflicted with poverty in his neighbourhood frequently went him when in difficulties, and it is worthy of note that as a Guardian he was always in favour of out-door relief, preferring this form of help to the needy to breaking up their homes by practically forcing them into the house.  By his death the Charity Organisation Society sustains a loss, he having been member of the Committee, and a regular attendant at the meetings.

As an ardent Conservative Mr. Vidler rendered his party much service, and the assistance which he gave as an enthusiastic worker will sorely missed.  He was president of the St. Mary's (Lower) District Conservative Association, and was no mere ornamental figurehead, but a real, live, active chairman.  ….