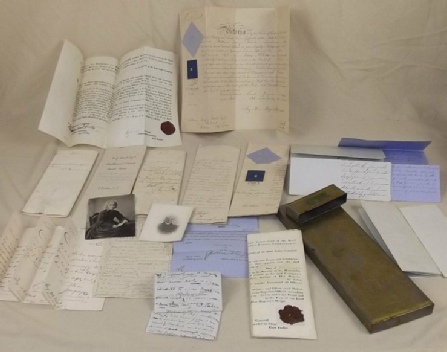 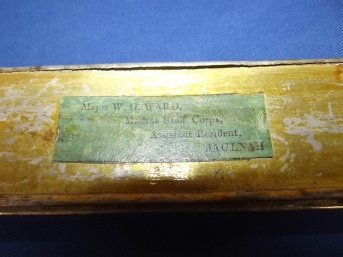 Colonel William George Ward, of the Madras Staff Corps, died Hastings on the 10th inst, the age of forty-eight. He received his first commission in 1851, served with the Madras Rifles during the suppression of the mutiny in Bengal from September, 1857, to November, 1859, and received the Mutiny medal with clasp for Central India

A collection of original documents relating to the Army career of William George Ward, the grandson of Admiral Lord Nelson was offered for sale on an auction site:

The contents include a printed picture of Horatia with a few pencilled biographical notes on the back together with a photograph presumed to be her husband, the Reverend Phillip Ward.

The various commission documents chart William's rise from Ensign to Lieutenant Colonel of the Land Forces in Madras in 1877.  Some sources appear to chart William's rise as far as Major, so it is possible some additional information about his career is contained here.

Also present is a Military Fund Office subscription letter, three letters from Grindlay & co regarding pay, a hand-written letter to William from 1873, and some 'Statements' that make it clear that William's health suffered during his whole residence in India, culminating in a recommendation that he return to England's 'cold climate' for a period of 20 months in 1863.

Tori, aged ninety two, died in Lutton House on 23rd May 1927.  She was buried in Hastings Cemetery with her husband.

Western Morning News  Wednesday 01 June 1927
Lutton Link With Nelson - A link with Nelson has been removed by the death at Lutton, South Brent, of Mrs. Catherine Nelson Parker Toriana Ward.  Mrs. Ward, who had attained an advanced age, was the daughter Capt. Edward Blanckley, R.N., who was descendant of Sir Walter Raleigh through the daughter of Sir Walter's son Carew Raleigh.  Mrs. Ward's mother was a daughter Catherine Matchom, the youngest sister of the great Lord Nelson.  Mrs. Ward's husband, Col. William George Ward, Indian Army, was a son of Nelson's daughter Horatia, who married a clergyman, the Rev. Philip Ward.

Yorkshire Post and Leeds Intelligencer - Monday 01 August 1927
Mrs. Catherine Nelson Parker Toriana Ward, of Lutton, South Brent, a descendant of Sir Walter Raleigh, and a great niece of Nelson, widow of Colonel William George Ward, who was also a grandson of Nelson, left unsettled property in her own disposition of the gross value of  £19,537

The documents of William George Ward and the tin that held them.

William, returning briefly to India was promoted to Lieutenant Colonel, but contracted an illness during his return voyage to England in 1878.  When he arrived in Pinner, his family were alarmed by his poor health and packed him off to Hastings, Horatia’s favourite health spa, to recuperate.  However, William’s weak health finally got the worse of him and he died in Hastings on 10th August 1878.  He was buried in Hastings Cemetery on a small hill with view of the sea. 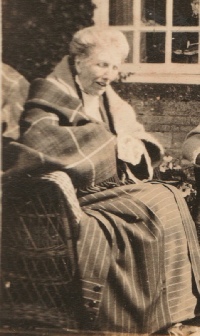 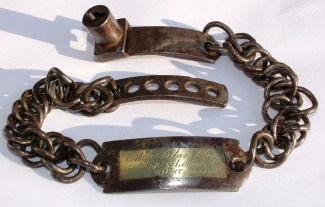 Tori in old age, and, above, a dog collar from her dog when young.

[Many thanks to Lily Style. the 2nd great grand-daughter of William and Catherine Ward, for much of this information and photos.]