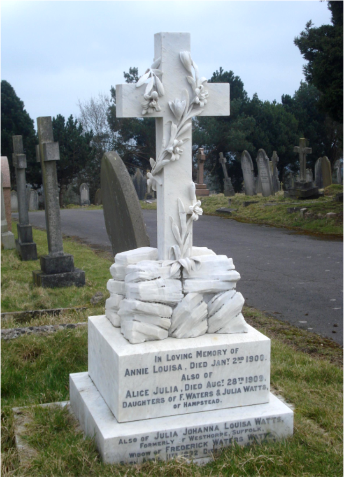 Very little is known of Watts's (died 1870) first marriage.  He was a painter, often described as being in the style of Constable.  (But it may have been his own style.)

Since so little is known of Watts’ life, in 1911 Ernest E. Leggatt of Leggatt Brothers wrote a letter to the Daily Telegraph requesting information concerning “the eminent artist Frederick W. Watts.” By return, Watts’ widow Julia, then living in St. Leonards-on-Sea, replied mentioning that she was still in possession of a few of her husband’s oil paintings “some beautiful watercolours, as well as a True Copy of Constable’s Corn field and a large one of Hobema’s [sic]”.

MISS ALICE JULIA WATTS. Much sympathy will felt for Mrs. Watts, of Wcsthorpe, Scdlescombe-road South, in the loss she sustained on Saturday by the death of her only daughter. Miss Alice Julia Watts.  The deceased had been for some considerable time a constant and devoted supporter and worker at St. Matthew's Church and in its parish, and although away on a short vacation at the time, the Rector journeyed home to officiate at the last sad rites.

The funeral took place on Thursday, the first portion of the service being held at St Matthew's Church, at which the Rector, the Rev. JI. Foster Pegg. and the Rev. A. E. Lord officiated…….. The interment took place at the Borough Cemetery in the family grave, which had been most tastefully adorned and decorated.  The coffins, of which there were two, consisted of an inner shell satin and an outer case of polished oak with massive silver furniture- …………