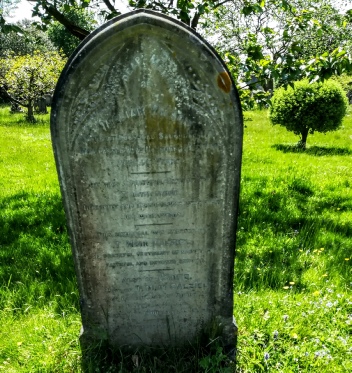 He was a faithful  servant & trusted friend. Integrity & truthfulness were ever his watchwords.

This memorial was erected by T.Muir Dalziel in grateful testimony of many years faithful & devoted service.

Agnes was born about 1845 in Durisdeer, Dumfriesshire, Scotland

She was married, aged 35, 22 Aug 1881 in Gaukthorn, Durisdeer, Dumfriesshire to Thomas Dalziel, a draper.  Ten years later, in the 1891 census Agnes and Thomas are living at 11 Alma Terrace, Penzance, Cornwall, along with a domestic servant, but no children.

The stone is difficult to read, but it seems odd, if, as appears, it say that William, who died aged 26, gave “many years faithful & devoted service.  Coghead is now a ruin, it is described as a shepherd's cottage, though looks rather large to be so described.  It is near Sanquhar, Dumfries & Galloway.  There is online a transcript of a compilation of the memorials in Sanquhar Kirkyard in which the name William Wilson occurs several times.