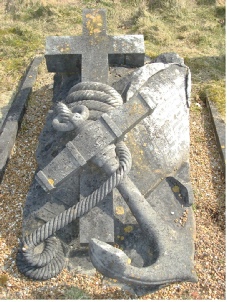 [Captain Woodruffe’s memorial is by G H Brett [Mason 1892 –1926] who had premises at Baldslow and Hollington  His son James was also a talented mason and for a time they worked in partnership.]

Charles Sheldon Pearce Woodruffe was the son of Daniel Woodruffe, Lieutenant R.N., by Maria  his wife [widow of Adcock].

He served in boats of "Agamemnon" in landing troops in the Crimea.  He was present at the bombardment of Sebastopol and under fire at Balaclava.  He was several times under fire in boats whilst reconnoitering in the "Royal Albert" at captures of Kinburn and Kertch (Crimean and Turkish  medals, Sebastopol clasp).  He served in  boats of "Magicienne" on several expeditions against pirates, 1858, in the China seas.  He was part of the landing party at the storming of the Peiho forts, June 1859 and served in boats of "Imperieuse" in the Peiho River 1860 (China medal).  He was wounded whilst there.

From about 1874 –1877 he commanded the Coastguards at Great Yarmouth and during this time he received a certificate for saving life when the Kensingland lifeboat capsized near Yarmouth.  Then he went to the Persian Gulf in HMS Reason.

He lived at Old Roar House, Silverhill Park for 27 years.  He was one of the managers for Silverhill schools and represented St Mary in the Castle parish as waywarden on the Highways board.

DEATH OF CAPTAIN WOODRUFFE A LOSS TO SILVERHILL.

We regret to record the death of Captain Charles Sheldon Pearce Woodruffe, E.N.. Old Roar House, Silverhiil Park, St. Leonards, which occurred Saturday at the age of 67.  Captain Woodmffe had been in ill-health for some time, but it was only during the last three weeks that his malady assumed a more serious aspect.  He had Lived at Old Roar for the past 27 years, and his loss will be considerably felt in the locality.  Since residing in the neighbourhood he took great interest in the Silverhill Schools, of which he was one of the managers.  He formerly represented St. Mary-in-the-Castle as Waywarden on the old Highway Board.

From about 1874 to 1877 Captain Woodruffe commanded the Coastguards Great Yarmouth.  He then went to the Persian Gulf in H.M.S. Beacon.

After his return to England he commanded the Coastguards at Hastings amd St. Leonards, and along the coast, from 1881 to 1885. Captain Woodruffe retired in 1887.  He received the certificate for saving life when the Kessingland lifeboat capsized near Yarmouth on the 15th July, 1875.

The deceased Officer leaves a widow, two sons, and one daughter.  One son is in South Africa, and the other in the Ist Royal Sussex Regiment. The funeral took place on Wednesday, at the Borough Cemetery. ……………….

The coffin was of polished oak, with massive brass fittings. The coffin-plate bore the inscription; “Charles Sheldon Pearce Woodruffe; Born 12th May, 1839, Died September, 1906.”  The deceased was interred in a brick grave.  The floral tributes were very numerous and beautiful